It’s officially jazz time! The 44th Guinness Cork Jazz Festival kicked off in style last night at an opening event at St. Peter’s Church, which was attended by the Taoiseach, big names in jazz, local stakeholders, media and influencers.

Those attending were treated to a preview of the ‘We Got the Jazz’ Exhibition, which showcases the work of one of the most important music photographers of the twentieth century, Chuck Stewart. The Stewart family flew in from the US for the special occasion. 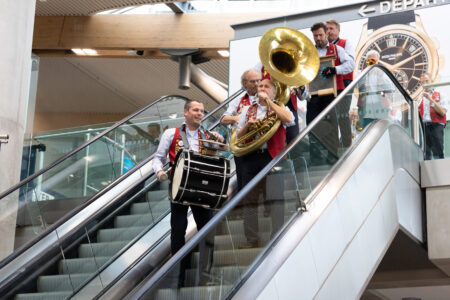 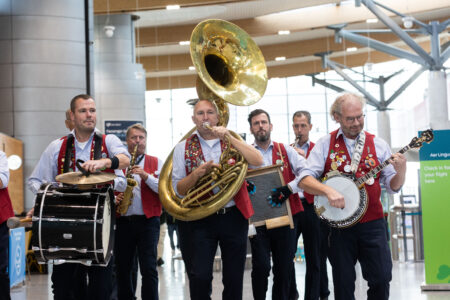 “We in Cork are incredibly proud of the tradition of the Guinness Cork Jazz Festival weekend. What started as a small idea by the Metropole Hotel to bring life to the city on a quiet October Bank Holiday weekend, has been embraced by the general public and the traders in Cork, and brings over 43,000 visitors to the city every year. The festival is a fantastic showcase of Cork hospitality, and brings incredible economic impact, so long may it last!

Taoiseach Micheál Martin said he was

“incredibly impressed by the ‘We Got the Jazz’ photo exhibition at St Peters showcasing the work of the great Chuck Stewart. It’s an honour for Ireland to have this exhibition here and to see so many of his family gather tonight for the occasion. The Guinness Cork Jazz Festival has a massive impact on local businesses, who all see a huge boost over the weekend – and the fact that it is now in its 44th year is a testament to the founders, the hard-working Cork Jazz Festival committee, all of the publicans and hoteliers who pull out the stops over the weekend, support from stakeholders like Failte Ireland, Cork City Council and Cork Airport…and of course the dedication of Guinness and Diageo, who invest significant time and money into the organisation and overall management of this Festival year after year.” 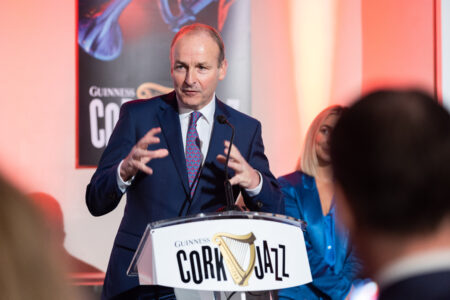 “After the past 2 years, this year feels particularly special. I think we can all agree that the city feels alive with excitement. Failte Ireland recently estimated that the festival is worth over €20 million to the Cork economy, but what’s equally important is the people of this city who welcome our visitors with open arms. Guinness is extremely proud of our long-standing relationship with the festival and we are honoured to be on the journey in our mission to mirror the success of major international jazz events.

“We are delighted to work with festival director Mark Murphy and his team at Choice Cuts who’s evident love for Jazz has been a driving force in the development of this year’s festival programme and bringing Guinness Cork Jazz Festival to new heights.

“It’s our ambition to make the event one of most sought after Jazz festivals in Europe – to make it a destination for everyone to come to. So the possibilities are limitless. This year is just the beginning of that. We at Guinness are fully committed to its success and we truly believe the future is bright. The Guinness Cork Jazz Festival is a huge undertaking and it simply wouldn’t happen without many groups all working together to stage this wonderful, now five-day music event.”

The Guinness Cork Jazz Festival is one of the biggest and longest running events on the Irish music calendar. This weekend, the city will play host to over 1000 musicians and world class jazz greats of international acclaim from over 20 countries to entertain 43,000 visitors to the region, making the 2022 festival bigger and better than ever before.

The festival line-up also features The Guinness Music Trail in over 72 pubs, theatres, clubs and hotel venues across the city, Douglas and Kinsale, which is the biggest yet.

There’s also The Big Fringe of mainly free music that will see international and local Big Brass Bands perform around the city and more, organised by the local Cork Jazz festival committee

Also, be sure to call into the Metropole Hotel which is the original home of Guinness Cork Jazz Festival where the Metropole Festival Club have a host of showstopping performances taking place over the weekend. There really is something for everyone.

Whether you have a passion for jazz or just love festivals, the line-up at this year’s Guinness Cork Jazz Festival has something for everyone. There’s exceptional balance of really strong jazz that’s on par with jazz festivals from around the world mixed with bands that are festival crowd-pleasers. There’s pure jazz, soul, and fusions of jazz R&B, house and hip-hop.