Cork headquartered, international flight school, Atlantic Flight Training Academy (AFTA), has announced a new Pilot Training Partnership with GlobeAir, a leading private jet charter company, to train cadets for their future careers as commercial pilots in 2023/2024. The candidates who will be involved in the pilot training programme as part of the partnership between AFTA and GlobeAir will go on to receive 18 months of extensive training in Cork and Waterford airports in Ireland.

The new pilot training partnership between GlobeAir and AFTA will see successful student cadets fly AFTA’s next generation G 1000 NXI Glass cockpit Cessna 172’s for the initial phase of the flight training, followed by the Diamond DA42 NG, B737 NG and 737-8200 simulators for the advanced phases.

“GlobeAir continues to identify innovative partnerships to help us stay at the forefront in the private aviation sector. We have carefully selected AFTA as our pilot training partner due to their high standards and commitment to excellence. By working with them, we hope to provide a path for a new generation of aviation enthusiasts to join the GlobeAir”.

“We are proud to have been selected by GlobeAir to train cadets for their future careers as commercial pilots in 2023/2024. Our new partnership with GlobeAir is testament to AFTA’s successful record of helping leading global airlines to train their pilots to the highest possible EASA standards in a training environment designed to challenge and enhance their cadets flying skills. AFTA will celebrate 28 years training commercial pilots in their careers next year and we look forward to the next 28 years expanding the business on the world stage.” 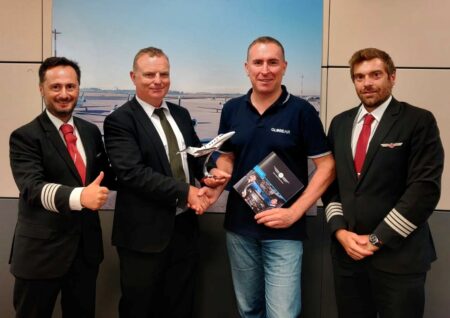 Atlantic Flight Training Academy, founded in 1995, is Ireland’s largest – and one of Europe’s leading – Independent Flight Training Organisations. The Academy approved by the European Aviation Safety Agency (EASA) is headquartered at Cork International Airport with a secondary base at Waterford Airport.

The Academy has been training international cadets for many years, with contracts including, Ryanair, Pegasus Airlines, Turkish Airlines & Air Astana.

Equipped with a modern training fleet AFTA also boasts state-of-the-art B737 NG and 737-8200 simulators. AFTA has an unrivalled success rate and have trained in excess of 2,300 high-calibre pilot graduates for commercial airlines since 1995.

AFTA is recognised by leading global airlines as a pioneer in the Pilot Training industry, working with its University partners including Munster Technological University (MTU) in providing prospective pilots with a unique blended approach to becoming a commercial pilot, while also gaining an Honours primary degree, through the Bachelor of Science (Hons) in Global Business and Pilot Studies (BSc) programme and also through the BA (Hons) in International Business with Aviation Studies programme. Students have a choice of Integrated or Modular Pilot Training Programmes.

More details can be found at www.afta.ie

With more than 50% of the market share, GlobeAir is Europe’s leader in the entry-level private jet sector, including a premium experience. With 160 employees (80 pilots), the company generates about 96 per cent of its revenues abroad. GlobeAir is available 24/7 all over Europe with 21 private jets connecting European cities like London, Geneva, Zurich, Paris, Nice, and Milan with small airfields that are difficult to reach such as St. Moritz or Lugano and 950 more. The company has achieved its success through dedication and by offering bespoke service before, during and after the flight.