Following a nationwide search to uncover Ireland’s most inspirational people, Noreen Murphy, from Bantry in County Cork, has been named as Overall Inspirational Person of the Year following the recent Gala Retail Inspiration Awards with Virgin Media

Founded by Noreen Murphy after her husband died by suicide, Noreen established Lisheen’s House Suicide Prevention Charity to support people in the community and the surrounding areas, who may be in crisis or affected by suicide. Many years on, the services that Lisheen House offers throughout Cork city and county have  evolved. The charity now has a unique Wellness Centre, a panel of counsellors, support for the families and friends of those in crisis and it delivers QPR Suicide Prevention Training.

Speaking about her accolade, Noreen said: “I was shocked but delighted to have been nominated in the Gala Retail Inspiration Awards, and then to be told that I was named as Ireland’s Overall Inspirational Person of the Year is so humbling.

“I do what I do for the love of my community and the people within it. I have to say though, that I wouldn’t be able to carry out my work without the help and support of so many people. In reality, this award isn’t really about me, it’s about the Cork community as a whole.

“I’m very grateful to my local Gala stores that share in the spirit of helping our local community, and would like to thank Gala Retail, Virgin Media and those who nominated me for this award, which I’m accepting on behalf of the many people in our County that give so generously to help others each and every day.”

Inspirational people from across Ireland were nominated for the Inspiration Awards, with 26 inspirational country heroes being named from the hundreds of entries received.

Gary Desmond, CEO of Gala Retail, added: “Noreen’s story is incredible. Through her own personal tragedy, Noreen has built a service that has benefitted so many families in County Cork and beyond. Her dedication to help others is what’s truly inspirational about Noreen and she’s such a worthy winner of Ireland’s Most Inspirational Person 2022.

“Many congratulations to all of the county winners. In this, our fourth year of the Gala Retail Inspiration Awards, we never cease to be amazed by how people are contributing to their local communities to the benefit of us all.

“Operating in communities throughout Ireland, Gala Retailers have seen first-hand some of the great work that people have been doing and we are proud to have been able to recognise and celebrate some of these inspirational individuals through our Inspiration Awards.” 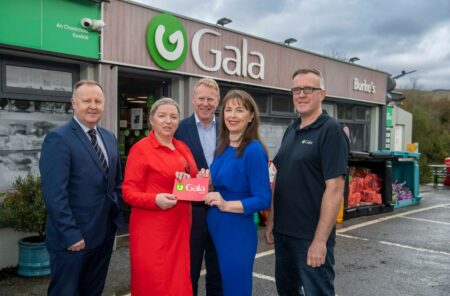 As a community retailer with 175 convenience stores nationwide, Gala store owners often hear of inspirational stories within their local communities, and this year’s Gala Retail and Virgin Media Inspiration Awards have elevated Ireland’s unsung heroes onto a national stage, giving these inspirational people the recognition they deserve.