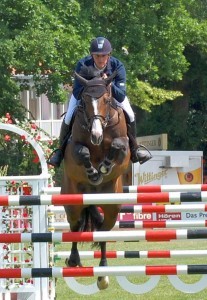 File photo of the Cork rider who grew up at Hitchmough’s Riding School near Raffeen, Monkstown, Co Cork

Riding Sue Davies’s mare ‘Tinka’s’ Serenade’, which he piloted to 11th place at the World Equestrian Games in Kentucky last month, Cork-born Twomey qualified for the jump-off at Verona with a faultless first round. But though returning a zero score on his second outing, he finished just under two seconds off the pace of the eventual Netherlands winner, Jeroen Dubbeldam and ‘BMC van Grunsven Simon’, who collected the 35,000 euro first prize.

Ireland’s other two World Cup contenders today, Cian O’Connor and Jessica Kurten, failed to make it to the second round, with O’Connor picking up four faults first time out with ‘Splendor’, and Kurten collecting eight faults on ‘Castle Forbes Cosma’.

Kurten had claimed a sixth place in the earlier two-phase competition with ‘Lector’.