Cycling legend *Sean Kelly* today (Thursday) led 140 amateur cyclists from the City Hall in Cork on a 640km Charity Cycle around the six counties of Munster, which will take place over the next four days. The cycle known as *The Tour de Munster,* is now in its *12th year*, with all proceeds going to *Down Syndrome Ireland *(Munster branches), for the third year in a row.

*Sean Kelly* is an avid supporter of *The Tour de Munster* and will cycle with the group for the full four days of the Tour, covering an average of 150 km per day.

Joining the supporters who were there to see the cyclists off on the Tour, included *Pat Clarke*, *Chief Executive of Down Syndrome Ireland* and *Tony Scott*, *Sales Director* of *Nightline*, the main sponsors of the event.

Cork’s Lord Mayor of Cork City, *Cllr John Buttimer, *also* *cycled alongside the cyclists at the beginning of their journey, as they made their way *towards Glanmire.*

*Pat Clarke,* who spoke at the send off* *said* “**I am delighted to be here today to congratulate the organisers for all their hard work. Down Syndrome Ireland is delighted to be the beneficiary of the Tour de Munster for the third year running and in the current economic climate, every bit of financial help is most welcome, to support the work of our Munster branches.”*

Tour Organiser* Paul Sheridan* also said a few words *“After all our hard work our Tour de Munster journey is about to begin and I am looking forward to the support we will receive- no doubt it will spur us on during this tough journey around Munster. Every year I am amazed by the well wishers, the friendly faces, the welcome and the massive support in every city, town and village we pass. It makes this event what I believe to be the best charity cycle out there, with an incredible atmosphere and fantastic results for a very worthy cause, Down Syndrome Ireland.”*

Each cyclist covers their own expenses so that all money raised goes directly toward Down Syndrome Ireland (Munster Branches)*.* Many of the courageous participants have cycled the *Tour de Munster* with Paul year after year, but for some, this is their first *Tour de Munster*and completing this journey will be a spirited achievement. *The cyclists involved come from all over of Ireland* and have been training for months. They are united in their common goal of finishing the Tour and raising as much money as possible through individual sponsorships and also through the bucket collections which will take place over all stages of the *Tour de Munster*. 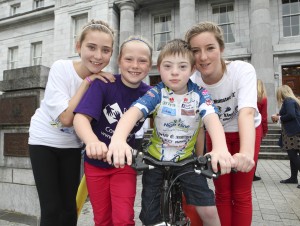 free pic no repro fee Gillian O’Gorman, Emer Hunt, David and Aisling O’Gorman all from Glanmire ,The Journey Begins at the 12th Annual Tour de Munster Charity Cycle In aid of Down Syndrome Ireland at City Hall Cork ,Cycling legend Sean Kelly today led 140 amateur cyclists from the City Hall in Cork on a 640km Charity Cycle around the six counties of Munster, which will take place over the next four days, with all proceeds going to Down Syndrome Ireland picture by GMC Photography 087 8537228 more info contact Mary Quille Fuzion Communications 021 4271234 086 866 2225