Una Butler, whose husband and daughters died in tragic circumstances two years ago, has spoken publicly for the first time about it to RTÉ’s Southern Editor, Paschal Sheehy. In the wake of her experience, she is calling for mandatory risk assessments to be conducted on the families and children of mental health patients and wants the law changed to require medical personnel to involve the partners and families of patients.

It was on Tuesday, 16th November 2010, that Una, from Ballycotton, County Cork, suffered the heartbreaking loss of her husband, John and their two young daughters, six year old Zoe and Ella, aged two. John, who suffered from depression, killed the two young girls before taking his own life.

On RTÉ’s Morning Ireland today, Una describes in detail the day that her life changed forever. She remembers: *** “My alarm clock was set for half-six as normal and, of course, I slept it out and John woke me at half-seven. I got up then and I put Zoe and Ella’s clothes on the rads, put the heating on and I carried out to work as normal. I thought he was a bit down in himself, but there was lots of days he was down in himself so I’d ring when I’d get to work, see if everything was alright. So I got to work about ten to nine and I was ringing home and I was ringing his mobile and there wasn’t any answer. So, I rang his sister to ask her would she invite him down for the day just to occupy him really when he was minding Ella — Zoe would have been going to school — and she rang back to say she wasn’t getting any answer from him either.”

She recalls: “So, I kind of continued ringing. I rang around to my friends, my sisters, to see if they had seen him drop Zoe to school and none of them had seen him. So, I had my break as normal in work and I was still uneasy. So, when I got back from my break I rang and, my sisters, none of them had seen him. So I said I’d drive home thinking maybe he’d left the phone at home and gone for a spin with Ella in the car. And then, I was met by the Guards in Ballinamona and they stopped me there to say there was a crash up the road. But I was wondering, I said where was Ella because I knew he was meant to be minding Ella and I had presumed Zoe would have been in school. So then the Guard just said your brother is on the way down. So, I then went, my brother told me what had happened and I just couldn’t believe it and I stopped at the house — the Guard was outside there — to ask him if I could go down to see Zoe and Ella, but I wasn’t let. I just couldn’t believe what I was hearing to be honest. John was never, he never harmed me physically or Zoe or Ella, ever. So I just couldn’t believe what I was hearing; didn’t want to hear it really to be honest, and I don’t think I believed it until I saw my girls”.

She continues: “I remember that morning that I was like a robot saying “Can I go down to see my girls?”. But in my own mind I don’t think I actually wanted to go there to see, really, what was after happening because I didn’t want to believe it. ………

“I think I was in shock for a long time afterwards and to this day, I suppose, I’m still trying to accept what had happened — that Zoe and Ella, their lives were taken by their own father who did suffer with depression. And that’s why I believe that that spouses or partners or partners should be involved. Because, when you are living with somebody that’s suffering with their mental health, it not only affects them; it affects the whole family.”

Una wants mandatory risk assessments to be conducted on the families and children of mental health patients. And she adds “And the other is to involve spouses or partners in the treatment. Family involvement, to also get the bigger picture and I think it would benefit both the medical professionals and the patient”.

When Paschal asks her about existing guidelines advising health professionals to involve family members, Una says: “It’s not enough for the welfare of children. It needs to be set in stone for the welfare of children, that they have to be involved in the treatment. Children don’t have a voice, you know, when they are so small. And spouses should have to speak on their behalf.”

She talks about her daughters and says: “My world was turned upside down. Zoe and Ella were my life. Their future was wiped out. And all my hopes and dreams for them. And it is excruciating pain that sometimes I would have thoughts of suicide. But medication isn’t going to solve my problem. And with John, I will never forgive John for what he did to Zoe and Ella. A lot of the time I’m angry with him. But I’m also sad; I feel sad for him. I’m very angry. I’m waking up to a living nightmare every day, and I don’t want anyone else to wake up to what I have to every day of the week. Changes have to be made for the welfare of children; for the patient themselves. I believe that, if the changes are made, it will help to prevent re-occurring tragedies”.

The 2001 Mental Health Act is the legislation which governs this area. It is currently under review and submissions, including those made by Una Butler, will be examined by an expert group which is due to report by March of next year. 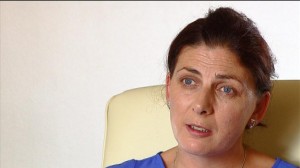