Corkman Padraic Corcoran had a simple and direct approach to selling
his beloved Volkswagen Transporter Van on popular website DoneDeal.ie.
“She’s in great running order but ‘The Man’ says I need some paperwork
to put her on the road. She needs a bit of love to get her through the
DOE but I may as well be looking at a cow’s arse as trying to fix her
myself,” said the advertisement.

Padraic had a simple motive in mind – to sell his Transporter so he
could get an iPad. The ad drew a lot of attention, and it came to the
attention of the guys in Volkswagen Commercial Vehicles and Blackwater
Motors in Cork who made it possible for Padraig to keep the 1996
Transporter T4.

“The advert made us all laugh, but we didn’t like to see the van go
for the sake of an iPad so between ourselves and Blackwater Motors in
Cork, we decided to allow Padraig to keep a hold of his van and get
his iPad,” said Volkswagen Commercial Vehicles Ireland Brand Director
Alan Bateson.

Blackwater Motors gave Padraic’s van a full valet, as well as a brand
new iPad to keep him and his Transporter together as a family unit. 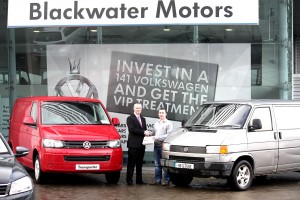