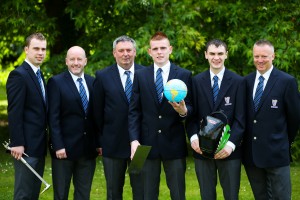 Cork apprentices, John Murray, Owen Murphy and Dean McSweeney will represent Ireland in Plastering and Drywall Systems, Welding and Construction Metal Work at the 43rd WorldSkills Competition in São Paulo, Brazil from11 – 15 August 2015. John, Owen, Dean and their fellow team members were selected from the winners of the National Skills Competition Finals which were held in Cork Institute of Technology in December 2014.

The Irish young people, all under 25 years, have proven expertise in their chosen field having competed against their peers to secure their places at the Competition. They will showcase their skills and talents in the areas of Aircraft Maintenance, Automobile Technology, Beauty Therapy, Cabinet Making, Carpentry, Construction Metal Work, Electrical Installations, Industrial Control, Joinery, Plastering and Dry Wall Systems, Plastic Die Engineering, Plumbing and Heating, Restaurant Service and Welding.

Competitors , who come from Meath, Wexford, Dublin, Cork, Cavan, Galway, Monaghan, Cork, Leitrim, Mayo, Clare and Latvia, have been in fulltime training for the past 8 weeks under the direction of their coaches. The Team has been trained in the Institutes of Technology (CIT, DIT, DKIT, WIT, AIT, Sligo IT and GMIT) and Education and Training Boards (Kerry ETB, Clare Limerick ETB, Waterford Wexford ETB and Dún Laoghaire Further Education Institute) and Shannon College of Hotel Management.

The WorldSkills Competition, which is held every two years, is the world’s largest professional education event. Approximately 1,200 competitors from 60 countries and regions will compete in almost 50 different skills and disciplines in Brazil. All competitors will demonstrate technical abilities both individually and collectively to execute specific tasks for which they study and/or perform in their workplace. Over 800 volunteers are assisting the expected 200,000 visitors and school groups

The Department of Education introduced national and international skills competitions to Ireland in 1957 and Ireland has participated in all Competitions since. Ireland has won 59 gold medals, 53 silver medals, 79 bronze medals and 152 diploma/medallions. In the last competition in Leipzig, Germany, Ireland achieved 11th place out of 53 countries. This continues the trend of Irish craft people consistently achieving outstanding results at the World Skills Competition.