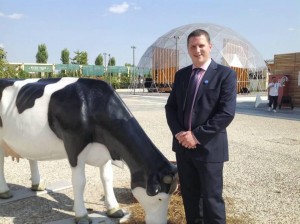 Macra na Feirme Past President, Alan Jagoe, Carrigaline, Cork has been elected President of CEJA, the European Council of Young Farmers, this afternoon in Milan. Mr. Jagoe finished his term as Macra President in 2013.

During his time as Macra President, he had the opportunity to represent Ireland’s young farmers at National, European and International level. Some examples of his work included the very successful Macra/CEJA Young Farmers conference in March 2013 in Dublin. He was instrumental in conducting studies and reports into “Land Mobility and Succession” and also very significant work with CAP reform in Ireland. He has been Vice President for CEJA for the last two year term.

Macra National President, Seán Finan, said, “I would like to wish Alan well in his new role, on behalf of Macra. Alan was an excellent Macra president and I have no doubt he will bring the same level of commitment and enthusiasm as well as insight to this role. Macra are active members of CEJA and we look forward to working with Alan during his term in office.”

Mr. Jagoe said, “I am delighted and honoured to have been elected President of CEJA. I am looking forward to representing European young farmers over the next two years. I would also like to thank Macra na Feirme for giving me this wonderful opportunity and experience”.