Father and Son named as ‘Cork Persons of the Month’

They have now received Cork Persons of the Month to mark their achievements, and their names also go forward for possible selection as Persons of the Year at a Gala Awards Lunch next January.

Father Liam won the Over 60’s on his fifth try in the competition, singing the classic Some Enchanted Evening from South Pacific. The Over 60’s is about to celebrate its’ 40th Anniversary, and is now the most successful event for older people in Ireland. It continues to be run by senior citizens spokesperson Paddy O’Brien, who originally established the format to combat loneliness amongst older people. Liam O’Leary was also an accomplished runner himself back in the day, with a marathon best of 2:41, and he actually finished 12th in the inaugural cork city marathon in 1982.

Thirty five year old son, Cillian, won this year’s cork marathon in a time of 2:30:41. He was a late starter to the sport, and it was not until he moved to Dublin at the age of 26 that his career really kicked off. Cillian, a school teacher, linked up with trainer Dick Hooper, Olympian and three-time dublin marathon winner; Cillian has now amassed a succession of titles, including National Half Marathon winner, National Road Golds and runs for Ireland in National Cross Country.

“I targeted this cork marathon race about a year ago. On the day, the Kenyan runner Vincent Chepyegon was ahead of me and it was a case of patience, persistence and tactics as I reeled him back in the final 800 m. I didn’t believe it was going to happen until mile 26, which was my fastest mile of the race at 5:08. ” said Cillian.

It was truly a magical week recently for the O’Leary family. Brothers Ronan and Fionn came home from London and Canada to celebrate the Marathon win, the Over 60’s win, the Persons of Month announcement and their parents, Liam and Deirdre’s 40th wedding anniversary. 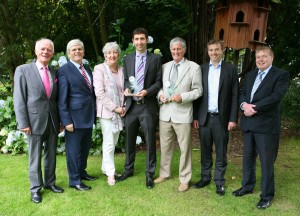