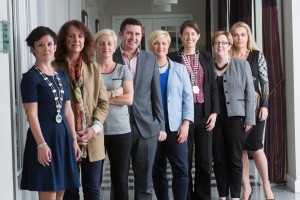 Synergy Southwest will take place on Friday 23rd October from 10 am to 1 pm in Charleville Park Hotel. Network Ireland’s Cork, Tipperary and Limerick branches and Kerry Businesswomen’s Network have organised this inter-branch event to promote and celebrate women in leadership roles in business, politics and the professions. The discussion panel for Synergy Southwest, which is being chaired by Newstalk’s Jonathan Healy, is composed of key politicians and business professionals , and they will debate topics such as women’s leadership roles in enabling entrepreneurship and business development for SME’s. As well as a strong group of panelists, a power brunch is included which is sponsored by Charleville Park Hotel and there will be many networking opportunities throughout the morning.

President of Network Ireland Cork branch, Helen Wycherley stated: “Synergy Southwest will be the first time we have organised an inter-branch event on a Munster level, and I see an event of this kind as a great opportunity for women throughout the region to meet like minded contemporaries. Gathering such fantastic women from all arenas – business, politics and the professions- is a celebration of women’s leadership skills in the Irish workforce. We at Network Ireland want to equip women with the skills they need to reach their full potential in terms of leadership and professional competence.”

Helen added: “The discussion panel will cover topics from growing your own business to navigating the paths of PRSI and taxes. This forward thinking event by Network Ireland’s Cork, Tipperary and Limerick branches and Kerry Businesswomen’s Network will be a great source of advice for women in their professional lives. Synergy Southwest will promote the leadership roles of women in politics and business, which is a message I strongly support.”

This event is not to be missed for the large pool of talented female professionals across Munster and is open to members as well as non members of Network Ireland and the Kerry Businesses Women’s Network. Fine Gael TD Áine Collins is one of the panelists for Synergy Southwest, and was keen to be involved from the early stages of this initiative. Áine stated “When I was approached about taking part in Synergy Southwest, I agreed immediately. It’s great to see women in the world of politics and business getting the most out of their professional connections, and creating a community from which they can draw support and inspiration from.”

Network Ireland has branches nationwide, and provides a platform for women in business, the professions and the Arts to become part of a supportive and resourceful community. It promotes the worthwhile contribution of women in the Irish economy and aims to help women reach their professional goals. Local branches hold monthly meetings Network members are treated to networking events with guest speakers, and members can avail of training, mentoring and support and advice from their contemporaries.