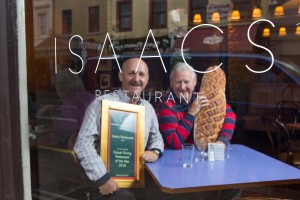 When people think “Award Winning Restautant” they tend to think: Kinsale, or certain parts of Cork City, but no one ever thinks of Mac Curtain Street, but think again! Isaacs have won another award.

‘Georgina Campbell’s Ireland’ has just announced their top recommendations for the best places to eat, drink and stay for the year ahead (2016). Scooping two of the top accolades, in separate categories, are Cork based Arbutus Bread – an artisanal wholesale bakery specialising in sourdough and yeast breads, which won the Natural Food Award, and Isaac’s Restaurant located on Mac Curtain Street, Cork serving seasonal and local dishes, which won Best Casual Dining Restaurant. The cherry on top of this outstanding achievement is that both businesses are owned by brothers Declan and Michael Ryan.

Commenting on behalf of Arbutus, Declan Ryan beamed saying, “We are absolutely thrilled to be named the Natural Food Award Winners, it really speaks to what we are all about in terms of ethos. Arbutus Breads are committed to producing natural artisan products without chemical additives to traditional methods, as we know this delivers the best product quality and customer satisfaction. There is nothing better than the smell of freshly baked bread and it is a credit to all our hard working team at the bakery to be recognised in this way.”

Speaking on behalf of Isaacs Restaurant, Michael Ryan welcomed the news saying, “It is always great to be told people like what you are doing, you put your heart and soul into each dish and to be recognised by a respected guide such as Georgina Campbell’s Ireland is the icing on the cake!”

The Ryan family have a long history of being at the cutting edge of the culinary arts having previously achieved Ireland’s very first Michelin star at Arbutus Lodge. The following year, Ireland had two Michelin starred restaurants, Arbutus Lodge and Cashel Palace both owned by the Ryan Family.

In 1992 Michael and Catherine Ryan along with Canice Sharkey opened Isaacs Restaurant in what was once a 18th century warehouse on Mac Curtain Street. This atmospheric venue has since gone from strength to strength with the support of next generation Emma Ryan who has recently joined the team, winning numerous awards, including this latest gong from Georgina Campbell. The dining experience at Isaac’s is regularly praised by leading food critics and guides and most importantly by its food loving customers!

Michael was not the only brother to put his experience and talent to good use as following the sale of the Arbutus Lodge in 1999; Declan who decided retirement was not for him, converted a garage at his house in Montenotte, Cork into a bakery and travelled to France to gain additional expertise. From humble beginnings Arbutus Bread has moved into a much larger premises in Mayfield, Cork and grown to now produce 2,000 loaves of a variety of breads every night, still made by traditional methods and using only natural, additive-free ingredients. Today the thriving bakery has seven fulltime bakers and is run by Declan and Patsy Ryan along with David Matues, head baker and from the next generation Darragh and Elaine Ryan.

Another family member has also got the food business bug as Philip Ryan (son of Michael and Catherine at Isaacs Restaurant) has established himself as a successful entrepreneur, introducing Cork City’s newest gastro-venue Brick Lane, and is an key organiser of a food and beer festival with locations in 4 cities across the country under the brand of ‘Oktoberfest Beag’. The Ryan family certainly have that winning recipe.

For more information on Arbutus see www.arbutusbread.com and for more on Isaacs see www.isaacsrestaurant.ie