Spearline Labs, the world’s largest toll and toll-free number testing provider has announced that it is hiring 20 people at its Skibbereen base as it looks to double its workforce over the next 18 months. The expansion is supported by the Department of Jobs, Enterprise and Innovation through Enterprise Ireland.

The company which was founded in 2003 by Kevin Buckley (CEO) and Matthew Lawlor (CTO) has a global presence in 50 countries and works with some of the world’s most influential businesses. It is the number one testing provider of choice for Fortune 100™ companies. 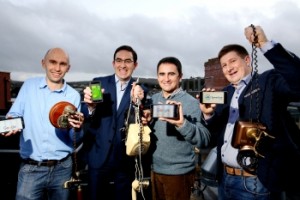 Pictured at the announcement was Matthew Lawlor (CTO Spearline labs), Declan Hughes (Assistant Secretary, Department of Jobs, Enterprise and Innovation), Ronan Harris (Head of Google Ireland, VP of Google EMEA), & Kevin Buckley (CEO Spearline Labs). Spearline Labs, the world’s largest toll and toll-free number testing provider has announced that it is hiring 20 people at its Skibbereen base as it looks to double its workforce over the next 18 months. The expansion is supported by the Department of Jobs, Enterprise and Innovation through Enterprise Ireland. Photography by: Emma Jervis

Supported by a 24/7 testing team using servers around the world, the industry-leading platform allows companies to check that their numbers are active and operational. It also measures call quality to gain an overview of issues which in turn leads to universal understanding of customer experience. To date, Spearline Labs has completed over 10million tests with a 400% increase in daily tests from this time last year.

The company is currently investing over €1million in new products which will be ready for market from early next year and will represent 33% of the company’s revenue by 2017. The primary focus of this investment will be on mobile line testing which will further broaden Spearline Lab’s offering.

Speaking of the announcement which marks the single biggest jobs boost for Skibbereen in over 30 years, Kevin Buckley, CEO said, “Today is a big day for Spearline Labs and for the West Cork region in general. When we set up in 2003 many thought that a technology company would not have the scope to succeed let alone expand in such a rural location. However, technology knows no boundaries and as long as the product is innovative and fulfils a market need then a business can thrive in any location. When the first telephone box was installed in Ireland in 1925 people thought it couldn’t get any better, yet less than 50 years later the first mobile phone was introduced. The world of technology is always progressing and we challenge ourselves every day to not only keep up with but lead the way in what we do here in Skibbereen.

With 20 people from 5 different countries already employed here we are excited about finding new colleagues to fill roles across a number of areas including Software Engineering, Support, International sales, Finance and Account Management. We are proud to be among the fastest growing technology companies in Ireland, and to again be awarded with a Deloitte Fast 50 award 2015, for the second year in a row. The future is very bright for Spearline Labs and we are looking forward to expanding our services to some of the world’s most powerful businesses.”

“At the heart of our Action Plan for Jobs is supporting jobs growth in every town and city across Ireland. Today’s announcement that Spearline Labs, a highly innovative Irish tech company, is creating 20 extra jobs in Skibbereen is a huge boost for West Cork and a great example of what is possible. This is the biggest jobs boost for Skibbereen in many years, and the fact that it has happened in an Irish tech company is a great endorsement of what can be achieved out of our own resources. I am delighted to congratulate Kevin, Matthew and all the team and I wish them every success in their growth”.

“We are always delighted to support Irish businesses, in particular those that are not only creating employment for their local region but are also making a mark on an international level. Spearline Labs is a great example of how smaller businesses can grow in a way which has only become possible with the development of new technologies and the internet. As companies grow in the digital marketplace, we see valuable jobs being created, such as those being announced today by Spearline Labs. I congratulate Kevin, Matthew and their team and I am sure that this announcement is the first of many as the company aims to become one of the region’s most progressive employers.”