Wayne Lloyd Hair founder and owner, Wayne Lloyd, along with stylists, Ciara Dorrington and Ciaran O’Sullivan, were amongst the winners and highly commended at the coveted ALFAPARF Fantastic Hairdresser Awards, attended by Ireland’s leading hair stylists at the Double Tree Hotel By Hilton in Dublin on November 1st. 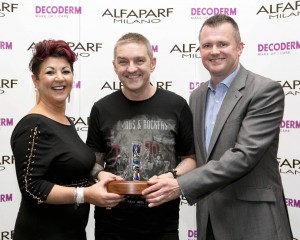 Now in their sixth year, the prestigious awards give stylists and salons nationwide an opportunity to show their creative expertise and technical excellence through six creative awards, two business awards, and an artistic award, the ALFAPARF Inixia Photographic Award. They are the benchmark of talent in the hairdressing industry, and saw almost 400 hairdressers from across Ireland dedicate months of hard work preparing their entries for the nine awards categories.

Leading stylist Wayne Lloyd, who has 30 years hairdressing experience, and is the owner of three salons in in Ballydehob, Bandon, and his latest venture on Washington Street, Cork City, which opened at the end of 2014, was crowned winner in the artistic category and walked away with the ALFAPARF Inixia Photographic Award.

Two of Wayne Lloyd Hair’s top stylists were highly commended, with Ciara Dorrington, who is based in the Washington Street salon, taking 2nd place in the ‘Fantastic Colourist’ category, and Ciaran O’Sullivan from Wayne’s Ballydehob salon, coming 2nd in the ‘Fantastic Gents Stylist’ category.

No stranger to awards, Wayne Lloyd and his team of 35 have won a number of prestigious awards including Ireland’s Best Stylist 2013, Global Stylist of the Year 2009 and 2010, and World’s Best Stylist 2007. Wayne Lloyd Hair prides itself on offering a great service, and specialises in creative unisex hair. Wayne himself is a proud member of Team Ireland and the Intercoiffure Fashion Team, and represents his craft both nationally and internationally on a regular basis.

Wayne expressed his delight at his win and respect for his two stylists saying “The ALFAPARF Fantastic Hairdresser Awards is one of the premier awards events in the Irish hairdressing industry so we were delighted to have two of our top stylists do so well. These awards really demonstrate the creative and artistic work of our styling professionals. I’m extremely proud of Ciaran and Ciara, and indeed our whole team who continuously strive for excellence in what they do, and I’m thrilled they received the recognition they deserve for all their hard work.”

The awards, sponsored by ALFAPARF Milano, the internationally renowned Italian luxury hair product company, were judged by a high-flying international panel of five industry experts. Acclaimed stylist, designer and TV presenter, Brendan Courtney, hosted the sold-out evening awards event to which some 1,200 stylists and industry insiders had been invited. He presented the awards along with ALFAPARF and Alan Austin-Smith, founder of The Fantastic Hairdresser Company. Each winner was presented with an Irish-designed and handcrafted stained-glass trophy.

ALFAPARF Milano brand is the standard within the hairdressing industry and is considered by both trade and consumer press worldwide as the undeniable leaders in state-of-the-art salon products. Speaking at the awards, David Donnellan of ALFAPARF Ireland said “ALFAPARF is all about the best talent using the best product. It’s about striving for excellence and achieving it. We know that the inspiration and creativity demonstrated at these Awards will end up being translated onto the streets, workplaces and social scene of Ireland – and that’s what we want.”

To book an appointment at any of the three salons call (021) 427 4234, or for further information visit www.waynelloydhair.com.