Are you paying too much for your car insurance? Premiums have risen by 5.9% in one month, or a massive 30% over the last year

Fianna Fáil Spokesperson on Finance Michael McGrath is based in Carrigaline, Cork. He has described the increase in motor insurance premiums revealed in today’s inflation figures from the CSO as shocking and has called for immediate action to be taken.

According to CSO data published today, motor premiums have risen by 5.9% per cent in the past month alone and 30% over the last year. Motor insurance is now the fastest rising item in the CSO basket of goods with insurers warning of further increases of up to 20 per cent in 2016. These statistics are despite the implementation of measures to improve road safety and reduce accidents. 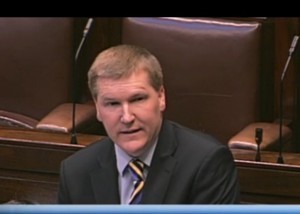 “Motorists are absolutely reeling from increases in insurance premiums. By the end of next year the cost of insuring an average size family car is likely to have gone up in the region of €300. This represents a massive hit to household incomes.

“Up to 2013 we were in a period of falling motor insurance premiums. However the benefits that were achieved from concerted action to reduce costs are now evaporating. This is resulting in a huge squeeze on family finances and putting businesses under increased cost pressure.

“Unfortunately, the situation has been met with indifference from the Government with the Minister for Finance seemingly only concerned with solvency issues relating to insurance firms. It appears no one in government is concerned with the interests of consumers and businesses when it comes to motor insurance premiums.

“I am reiterating my call for the establishment of a task force similar to the Motor Insurance Advisory Board (MIAB) whose recommendations successfully achieve a fall in insurance costs of 40 per cent in real terms between 2002 and 2013. The forum should bring together representatives of the insurance firms, consumer groups, the Garda Transport division and the industry regulator to propose practical measures to reverse this very worrying trend.

“We cannot rely simply on assertions from insurance companies to justify increases. I am setting out a number of measures that I believe would have a positive influence on insurance premiums.”

Full transparency on profitability of industry

MIAB found in the late 1990s that profits relative to premium for Irish insurers were considerably higher than for comparable firms in the UK. A similar examination of profitability is needed now. This would allow an assessment of the validity of industry claim that premiums are rising because personal injury awards are up to 3 times higher in Ireland than the UK. Many commentators suspect that the real reason for price hikes is a complete lack of transparency as regards the true profitability of insurance firms and a desire on the part of insurers to sneak in price rises on the back of requirements to hold greater reserves under EU rules.

The Central Bank of Ireland should be in a position to deny an insurance firm permission to operate in the Irish market if it believes that it is registering in another jurisdiction solely for purposes of availing of a more lenient regulatory regime. Unsustainable price competition is not in anyone’s interest and ultimately leads to a weaker overall market.

A number of high profile recent cases have undermined public confidence in the application of road safety measures particularly in relation to drink driving laws. The law must be made as water tight as possible to prevent the use of technicalities to avoid conviction. It must also be rigorously implemented across the country.

Those sections of the Civil Liability & Courts Act 2004 which were never progressed to deal with exaggerated claims should now be implemented.

The monetary limits of the courts were increased in February 2014 with the maximum for the Circuit Court increased to €60,000 for personal injuries. Greater on the job training is required for members of the judiciary to ensure that comparable cases are treated in a similar manner.

Clear distinction between MIBI and ICF:

The Motor Insurance Bureau of Ireland (MIBI) is a fund to deal with the claims by victims of uninsured or unidentified drivers. The Insurance Compensation Fund (ICF) is funded pay a 2% levy on all non-life assurance policies to cover claims where an insurance company collapses. In the case of Setanta Insurance, the failure to have clearly established rules as to which entity is liable has led to ongoing delays in meeting claims. This needs to be resolved by legislation in order to protect consumer interests.