Christmas tradition in Cork is now firmly established with a visit to the Cork Youth Orchestra’s annual Christmas Concert during the run up to Christmas.

Following on from the enormous success of the ‘Night at the Proms’ Concert in Cork’s City Hall last May, Cork Youth Orchestra, conducted by Tomás McCarthy are delighted to present Cork’s Christmas Proms Concert on 12th Dec 2015 in the City Hall.

The evening Christmas Proms Concert (8pm) will have many guests such as our own Michael McCarthy, a favourite among Cork audiences. Michael McCarthy made an incredible impact internationally with his critically acclaimed and powerful portrayal of Inspector Javert in the RSC musical production of Les Misérables. Les Neish will also give a performance of Tubby the Tuba which will accompanied not only by the Cork Youth Orchestra but also live animation by Sean O’Brien. Les Neish is one of the leading tuba players of his generation. His endeavours as a tuba player have gained him recognition as a soloist, chamber musician and educator throughout the world. The Lee Singers will add to the festive spirit. Cork Arts Studio Youth Choir will also perform.

Matinee Performances
Especially for families, the Cork Youth Orchestra are also putting on two special afternoon matinees where The Snowman, the ‘Twas The Night Before Christmas (narrated by Pakie O’Callaghan) and Tubby the Tuba will be played.

• These are suitable for all ages and will be at 12 noon and 2pm.

These concerts are a lovely introduction for children to the world of classical music and to savour the heartwarming atmosphere of a Cork Youth Orchestra Christmas Concert.

This talented group of young players represent the best of Cork’s young musical talent and are the same group that brought Colm Wilkinson, James Galway, Altan, Michael Ball and Hayley Westenra (among others) to the City Hall, Cork.

So, for what promises to be a spectacular day of music, book early through Pro Musica, Oliver Plunkett St. (021 4271659), Ticketmaster, O’Driscoll’s, Ballinlough or from a member of the orchestra. 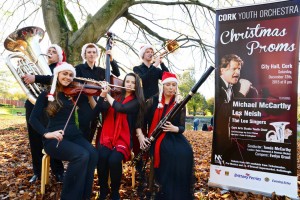