A small delegation of Irish tourism businesses, including Hayfield Manor, travelled to Moscow recently, to take part in sales mission – in a bid to grow Ireland’s share of the emerging Russian tourism market.

The three-day sales mission – organised by GoodCause Travel and supported by Tourism Ireland – involved meetings with top Russian travel agents and tour operators, as well as a networking reception at the Irish Embassy in Moscow, attended by companies involved in the MICE (meetings, incentives, conferences and events) sector in Russia.

Tourism Ireland believes the Russian market could play an important part in helping to grow overseas tourism to the island of Ireland in the coming years.

Breige Coward, Tourism Ireland, said: “Outbound travel from Russia is growing fast, with about 40 million visits outside of Russia taken each year. The majority of our overseas visitors come from the core tourism markets of Great Britain, North America and Mainland Europe and, while this will continue, it is important that we expand our focus beyond these markets and look to the longer-term opportunities presented by Russia and the other BRIC (Brazil, Russia, India and China) countries.

“We were delighted to co-operate with GoodCause Travel once again. Sales missions like this help develop and foster relations with key travel professionals in Russia, who can help us achieve our goal of delivering growth from this market of potential.” 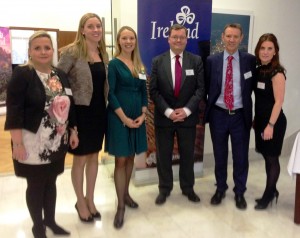