The Mediators Institute of Ireland (MII) have recognised Siun Kearney of RoundTable Mediation for her excellence in family mediation. The MII Award specifically acknowledges her contribution and commitment to mediation in resolving family issues, particulalry those involving children, separation and divorce. 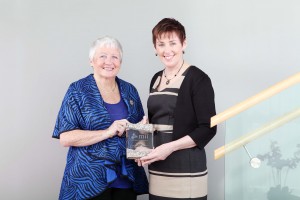 Siun Kearney is congratulated by fellow RoundTable Mediator on receipt of the Mediation Institute of Ireland (MII) Award for Achievement in Family (Separating Couples) Mediation 2015. The award recognises Siun’s excellence in mediation as a key element in resolving family issues, particularly those involving children, separation and divorce.
Pic Diane Cusack

Congratulating Siun Kearney, MII President Gerry Rooney said, “The MII Awards for Achievement in Family (Separating Couples) Mediation are our highest awards recognising the immense contribution to Family Mediation in Ireland. Today with this award, we are acknowledging the positive and trail blazing work, the energy and commitment to mediation that Siun has exemplified in her career as a mediator”.

In her role with RoundTable Mediation, based in Cork and Dublin, Siun Kearney has worked on very difficult separation, divorce and child custody cases. With utmost sensitivity, impartiality and confidentiality, Siun manages the mediation process to bring about resolution to a range of family issues.

“We are delighted that our colleague, Siun Kearney, has been recognised as a national exemplar of a family mediator. She is a true professional and has helped so many families through her work, while also enhancing the legal profession’s understanding of mediation, so that the best possible and long lasting resolution can be found in seemingly desperate situations,” said Ber Barry-Murray, Managing Director at RoundTable.

Only seven awards were presented this year to organisations or individuals, and included awards to the Family Mediation Service, Ann O’Kelly, Courts Service Mediation, Mediation Border Counties, Family Mediation Northern Ireland and Siún Kearney’s award. In addition, Delma Sweeney received a special award to acknowledge a life time of the practice of mediation, the promotion of mediation and the development of training and research standards.