Barnardos CEO Fergus Finlay has delivered the keynote address at an awareness morning for the Hands Up for Children campaign in Cork today. 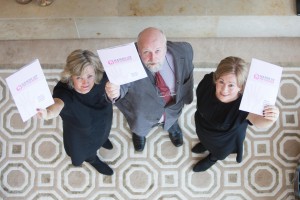 Pictured at the Hands Up for Children Awareness morning hosted by the Cork-based Ag Eisteacht charity at the River Lee Hotel were, Marian Quinn, Chair of the Prevention and Early Intervention Network, Dr Maeve Hurley, CEO and founder of Ag Eisteacht, and keynote speaker Fergus Finlay, CEO of Barnardos .
Pic: Darragh Kane

The campaign is a coalition of organisations from around the country, which is calling for preventative and early interventions for children and families to be a priority in the next programme for government. The event was organised and hosted by the Cork-based Ag Eisteacht charity, to highlight the initiative and to call on local politicians to endorse it.

Hands Up for Children’s 5 main ‘asks’ include increasing investment in Prevention and Early Intervention Programmes from the current €5 million to €20 million a year and, bringing investment in early years care and education up to the OECD average of 0.8% of GDP. (Currently it stands at 0.2%.)

Speaking at the event, Mr Finlay said that the lack of engagement in prevention and early intervention programmes is setting Ireland up to fail another generation:

“Barnardos is a long time campaigner of investing in and promoting Prevention and Early Intervention practices. Investing in childhood reaps benefits in improving children’s outcomes and guarantees long term exchequer savings. It is unacceptable that we know there is now one in eight children living in consistent poverty and we know what the solutions are to tackling this problem, but the political leadership in addressing this is lacking.

Failure to engage in prevention and early intervention programmes and improve availability of quality public services is short sighted and is setting us up to fail another generation of children. Barnardos wholeheartedly supports the Hands Up for Children campaign.”

Chairperson of the Hands Up for Children campaign, Marian Quinn who facilitated a discussion with local councillors at the event, said decision makers have choices and can commit to children.

“Looking after our children, or not, is a policy decision – simple as that. And to date, our Government has chosen not to see our future generation as a core priority.”

“We organised this event to highlight the need for increased State funding and a more targeted programme for early intervention. We believe that this approach will ensure that support and interventions are available to families at the most valued times, making a significant impact on children and family wellbeing. We also wanted to increase awareness of the Hands up for Children Campaign.

“We hoped that the Cork people and local politicians would lend their support to the campaign and we are delighted with the response. We have more than 100 attendees, five city and county councillors taking part in our panel discussion and we were also honoured that the Lord Mayor, Chris O’Leary, gave of his time to attend and show support for this important initiative.”

Ag Eisteacht delivers training to frontline workers, such as public health nurses and family support workers, who offer preventative interventions as part of their routine care of families. It has trained thousands of practitioners since it was established in 2001.

They were asked to publicly commit to prevention and early intervention as the one thing that they would do to make the greatest difference for children and young people and, to endorse the Hands Up for Children campaign.

Prevention and Intervention results in:
· improved bonding and attachment with parents
· improved educational outcomes
· better physical and mental health
· older children are less likely to use drugs & alcohol, have unplanned pregnancies and become involved with crime and anti-social behaviour
(Keeping a child in detention cots €314,000 per year, keeping a child in residential care costs €150,000.)
· reduced stress for parents
· better mental health and self-esteem for parents