Tourism Ireland has launched details of its marketing plans to promote Ireland overseas in 2016 and beyond, at an event attended by Tourism Minister Paschal Donohoe and tourism industry leaders from around the country.

The organisation aims to surpass this year’s record performance in overseas tourism and to welcome 8.2 million visitors to Ireland in 2016. This figure will represent growth of +4% over 2015 and deliver €4.4 billion to the Irish economy (almost +5%) next year.

To illustrate how much Irish tourism has bounced back since the downturn, a comparison of CSO figures for January to October 2015 versus the same period in 2010 shows superb growth in visitors from Britain (+20% in that five-year period), North America (+51%), Mainland Europe (+38%) and Australia and developing markets (+66%).

Building on this year’s success and sustaining growth into the future is at the heart of Tourism Ireland’s strategy for 2016. Factors working in our favour include: new flights to Ireland, stronger economies in our key source markets, the Ireland ‘brand’ (or image abroad) remains strong, as well as favourable exchange rates for sterling and the dollar. Other positives include Tourism Ireland’s strength in digital and social media (the organisation is the third most popular tourism board in the world on Facebook). The release of Star Wars Episode VII – which will feature Skellig Michael – also presents Tourism Ireland with a truly unique opportunity to highlight the South West and Ireland in 2016.

Following the success of the Wild Atlantic Way, a new ad highlighting our latest tourism experience, Ireland’s Ancient East, was also unveiled at the launch. The ad will be rolled out in January 2016 in 23 markets around the world. Tourism Ireland will also promote Dublin – “A Breath of Fresh Air” – in major markets throughout 2016.

Latest estimates indicate that, by year end, 7.9 million people will have visited Ireland in 2015, representing an +11% increase over 2014, with growth recorded from all markets. Revenue generated by international visitors is expected to be almost €4.2 billion, +16% increase over last year.
Niall Gibbons, CEO of Tourism Ireland, said: “2015 is set to be the best year ever for Irish tourism. And I am delighted to report that growth has been recorded from all our markets around the world – with record numbers arriving here from North America, Mainland Europe and Australia and developing markets. Throughout the year, Tourism Ireland undertook a packed programme of promotions, to bring Ireland to the attention of travellers everywhere. Thousands of opportunities were created for potential visitors around the world to read, hear or watch positive messages about Ireland; Tourism Ireland estimates that this media exposure is worth an estimated €320 million in equivalent advertising value.”

Tourism Ireland’s targets for 2016 will see Ireland welcome 8.2 million visitors, representing growth of +4% over 2015.
Commenting on the year ahead, Niall Gibbons said: “Following a successful 2015, ambitious targets have been set again for 2016 and beyond. We will unveil Ireland’s Ancient East around the world, while continuing to place a major focus on the Wild Atlantic Way. We will also highlight Dublin, in particular capitalising on the recent inclusion of Dublin at number three in the world in the prestigious ‘Lonely Planet Best in Travel 2016’. Early next year, we will leverage the huge global popularity of Star Wars, following the upcoming launch of Star Wars Episode VII. And we will work with the Department of Foreign Affairs and Trade, to highlight Ireland 2016 to people everywhere – showcasing major new attractions and the year’s signature events.” 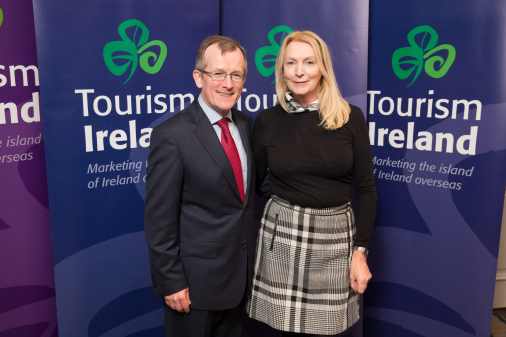 Niall Gibbons, CEO Tourism Ireland; and Linda O’Sullivan, Fota Wildlife Park, at the the launch of Tourism Ireland’s 2016 marketing plans in the DoubleTree by Hilton in Dublin.

What shall we do with the Lord Mayors Pavilion in Fitzgerald’s Park, Cork
Previous Post
Cork County Mayor to receive $7,500 donation from Irish American Partnership on behalf of three Post Primary Schools in Mallow