Ladies Footballer Mary White is Cork Person of the Month

Mary has just written a book ‘Relentless – The Inside Story of the Cork Ladies Footballers’, giving the full story of what made the Cork ladies footballers one of the most successful ladies football teams ever.

She played herself, she started promoting the game as PRO for the Cork Ladies Football Board aged just 22, securing major sponsorships for the sport, which included a three-year deal with Smart Telecom, and media sponsor the Evening Echo, and has spent the last decade covering the game for the Evening Echo and Irish Examiner while working a full-time job.

Over the past eleven years the Cork team have won the senior All-Ireland final ten times, losing just once ever in the All-Ireland series. They claimed their second five-in-a-row this year, with a record attendance for ladies sport in Europe. The growing popularity of ladies football has been driven by people like Mary White through her print and online journalism which has led to further growth in ladies football in schools and colleges. 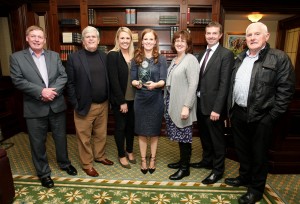