As part of the National Climate Change policy, Cork City Council, like all other public bodies, is required to reduce its energy consumption by 33% by the year 2020 which equates to 10 million units per annum.

The Kinsale Road landfill site (now Tramore Valley Park), which ceased accepting waste for landfilling in 2009, will continue to generate methane gas from the 3 million tonnes of waste deposited over the 40 year lifetime of the landfill site.

This gas will now be beneficially used to generate electricity for Cork City Council and also ensure that the Council meets its EPA license obligations in regard to landfill gas treatment.
The quantity of electricity being generated is adequate to supply 500 houses on an ongoing basis until 2021.

The project is a collaboration between Cork City Council, The Department of Communications, Energy and Natural Resources, who are providing ongoing support for the sale of electricity under the REFIT scheme, and a private energy supplier, Vayu Energy

“The electricity generation project will generate 3 million units of energy per annum that will be sold to Vayu Energy. The project, which has been funded by Cork City Council, will reduce emissions to the environment and will also substantially contribute to the Council’s 2020 energy reduction targets, as well as showcasing an innovative project in the Tramore Valley Park.
It is timely that the project be commissioned in the same week as the global summit in climate change is taking place in Paris”

“We are delighted to be partnering with Cork City Council on this project. It’s an excellent example of the type of initiative that will help in meeting the Government’s targets for renewable energy. We see enormous potential for schemes such as this to transform the way electricity is produced in Ireland over the decades to come. This is important not only from an environmental sustainability viewpoint but also in terms of the country’s long-term economic competitiveness and security of energy supply.” 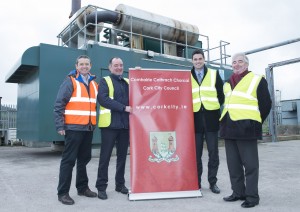