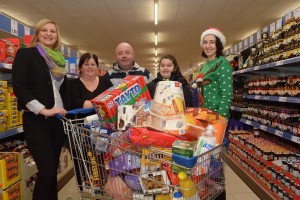 Lorraine Flynn was one of the lucky 143 winners of the nationwide Lidl Trolley Dash, which took place Saturday 19th December in every Lidl store across the country. As well as winning their Christmas shopping for free (the average of goods won per person totalled a staggering €400), each winner also contributed to the whopping €281,291 which was raised from ticket sales in just 4 weeks. A total of €27,751 was raised in Cork alone.

Speaking about Lidl’s Christmas trolley dash, Sinead Flynn, CSR Coordinator with Lidl Ireland, said: “We are thrilled with the result of our Christmas fundraising initiatives for our Charity partner Barretstown. Over four weeks, Lidl stores across the country have raised over €280,000 from one initiative alone. We would like to thank all of our customers who have supported Barretstown through these initiatives.”

Speaking about Lidl’s Christmas fundraising activity, Dee Ahearn, CEO of Barretstown, said: “We are absolutely delighted with Lidl’s fundraising activities in the run up to Christmas. So far €281,291 has been raised which is a phenomenal amount of money. These funds will go a long way to reducing our waiting lists and increasing our capacity to take part in more hospital outreach visits, which is a programme we launched in 2013. Each year Barretstown has to raise €4.5m to stay operational and it’s initiatives such as these that help us reach that target.”

To enter the contest, customers purchased tickets for €1 at checkouts of 143 Lidl stores nationwide from Monday 9th November to Sunday 6th December. Winners were challenged to a ‘Supermarket Sweep’ style dash around Lidl to grab as much of their Christmas shopping as possible in just 2 minutes. 100% of proceeds from ticket sales will be donated to Lidl’s charity partner, Barretstown. For more information on Barretstown see www.barretstown.org.