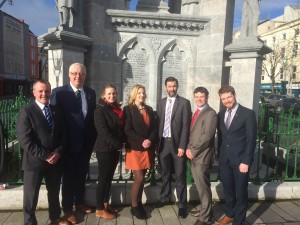 “There is little doubt that this is going to be a very good election for Sinn Féin. People right across Cork South West are responding very well to our message of equality, fairness, and better deal for rural Ireland. They have had enough of being marginalised and ignored by the establishment parties and they are now looking at Sinn Féin as a real alternative. There has always been a strong republican vote in West Cork. I believe that many more ordinary people are considering voting for Sinn Féin for the very first time. They feel very let down by the failures of the government.

“I think that if they give us a tick this time around they will be very impressed by how we go about our business and what we will deliver for rural towns and villages.”

“There is a tangible desire for change right across East Cork. People understand that they are better off with a Sinn Féin TD fighting for ordinary people throughout this constituency. They know that we are genuine community activists who are out engaging with people twelve months of the year, not just when elections roll around. The lack of social housing, the decimation of critical public services, flood defences and the uncertain future of Whitegate Oil Refinery are all major issues on the ground.

“I am receiving very positive and encouraging feedback on the doors. People are very glad to speak to Sinn Féin representatives because they recognise our commitment and hard work. I am confident that we will retain this seat in East Cork. I am very focused on articulating our proposals for a better Ireland. Sinn Féin will not break promises or turn its back on commitments made in our manifesto.

“I am extremely pleased with how people in Cork North West have received our canvass teams. We have been out day and night talking with voters. There is a lot of anger out there. Fine Gael and the Labour Party promised a democratic revolution in 2011. They delivered more of the same. Fianna Fáil are trying to pretend that all is forgiven, that people have simply forgotten the fact that their reckless policies and arrogance created the conditions for the crash. Many people like myself had their lives devastated in the wake of that crash.

“Younger people were given a stark choice – the dole or the boat. Lots of people in this constituency feel that they have been treated like second class citizens, that they are being ignored by the establishment. They recognise that Sinn Féin is trying to change all of that. They appreciate it. That goes a long way. People in Cork are looking for basic decency. That is not a lot to ask.”