Cork’s Lord Mayor, Cllr Chris O’Leary, officially opened the Commemoration Centre at St Peter’s Church on North Main St, last evening on Thursday, February 11. One of the city centre’s most iconic and historic buildings, the Commemoration Centre will host a wide range of exhibitions and cultural events during 2016 to mark Cork City Council’s Centenary Programme, celebrating 100 years since the Proclamation of the Irish Republic.

The Commemoration Centre will act as the hub of Cork City’s 2016 Programme and a central information location for the full range of activities taking place across the city during the course of the year. Renowned Cork historian and author, Tim Pat Coogan, also spoke at today’s launch.

The centre’s inaugural exhibitions are Rebellion! by Rachel Abrahams, focused on the people, both well-known and unknown, who played a part in the Easter Rising of 1916. Also unveiled today is Taispeántas le Chlúdaigh Ceirníní Gael Linn – an Exhibition of Gael Linn Record Sleeves 1957-2016

Speaking at the launch, Cork’s Lord Mayor, Cllr Chris O’Leary said: “As Ard Mhéara of Cork city, I am delighted to see St Peter’s Church back in use, and open to the public again. I am particularly pleased that this beautiful building is being used to commemorate 1916, and to act as a focal point for Cork City ‘s 2016 programme.

“This exhibition gives the citizens of and visitors to Cork an opportunity to engage with the background to the rising,” he continued, “while the activities and other events taking place over year will stimulate discussion and debate around the Rising, the 100 years since, and the legacy of that time into our future.

“We want to thank Rachel Abrahams, the curator of the exhibition here, who, along with Tim Murphy, has created an exhibition that explains the background to the Rising and gives a insight into the motivations of those involved.”

The themes of the events programmed for the Commemoration Centre during 2016 will be aligned with the national centenary programme, namely those of Remembering, Reconciling, Presenting, Imagining and Celebrating.

Christine Moloney, CEO of LeisureWorld, St Peter’s management company, said: “The team at LeisureWorld are very proud to re-open the gates of the beautiful centre at St. Peter’s to the public as Cork’s Centre Of Commemoration in 2016 and we honoured to be hosting the wonderful programme of 1916 events for Cork City Council and the people of Cork.”

The Commemoration Centre will be open to the general public during 2016 on Tuesdays – Saturdays from 11am – 7pm and further information on events as part of the Cork City Programme 2016 can be found at www.corkcity1916.ie. 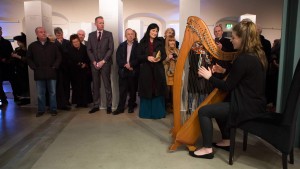 At the official opening of the Commemoration Centre at St Peter’s Church on North Main St on Thursday February 11, where it will host a wide range of exhibitions and cultural events during 2016 to mark Cork City Council’s Centenary Programme, celebrating the 100 years since the Proclamation of the Irish Republic.
Pic: Darragh Kane

Bandon to Kilbrittain road reopens to traffic this afternoon after storm damage repaired
Previous Post
Is it time to reign in election posters? a Cork General Election candidate thinks so