Voxpro has been named as one of Ireland’s ‘Best Managed’ companies in the Deloitte Best Managed Companies Awards Programme. The company, which demonstrated superior business performance for the fourth year running was recognised at an awards gala dinner in Dublin. 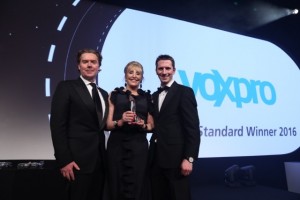 Speaking about this year’s award, Dan Kiely, Voxpro CEO, said, “We are absolutely delighted to have been recognised as a Deloitte Best Managed Company for the fourth year running. At Voxpro, we are totally committed to delivering a beautiful customer experience for iconic tech companies that are truly changing the world such as Google, Airbnb, Nest, Etsy, Stripe, Red Bubble and Weebly. By providing a highly skilled workforce with all the resources they require we are able to maintain that commitment to excellence in everything we do and continue to grow our dynamic relationships with these revolutionary companies.”