With more than 15,000 employees in the hotel sector in the Region, the Cork Branch of the Irish Hotels Federation today (Thursday) hosted an awards ceremony to recognise their Employee of the Year 2016. There were more than 70 applications for the prestigious award with a shortlist of 17 employees across a variety of roles and hotels and guesthouses in Cork.

Trainee Manager Lauren Hogan of the Oriel House Hotel, Ballincollig was announced as the winner of the IHF Cork Branch Employee of the Year. 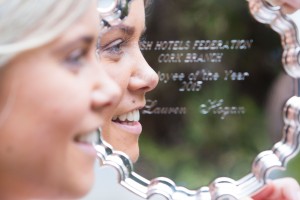 Pictured at the Irish Hotels Federation (Cork Branch) Hotel Employee of the Year Awards is the winner Lauren Hogan, Oriel House Hotel Ballincollig. There were more than 70 applications for the prestigious award with a shortlist of 17 employees across a variety of roles and hotels and guesthouses in Cork. Pic Darragh Kane

Expressing his congratulations, Darragh Brady, Chairman of the IHF Cork Branch and Regional Group Manager for Choice Hotel Group said: “While we have wonderful properties and destinations in Cork, we wanted to recognise the people working in the sector here. The high calibre and commitment of the employees in hotels across Cork city and county is what makes really makes a guest’s stay special, and Lauren Hogan is an exceptionally worthy winner.”

Speaking at the award ceremony, Lauren Hogan said she was “thrilled to be honoured by the IFH Cork Branch” and she paid tribute to her colleagues in the Talbot Group, both in the Oriel House Hotel and in the Talbot Wexford.

Sponsored by the Barry Fitzwilliam Group, in partnership with JM Casez, Lauren’s prize is a 3-day all expenses paid trip to the Bordeaux, the largest wine-producing region in France. In Bordeaux Lauren will tour the vineyards of Michel Lynch, and experience firsthand winemaking in the stunning setting of the Chateaux of this region.

The IHF Employee of the Year (Cork) competition was judged by Donagh Davern, former Hotelier and current Lecturer at the Cork Institute of Technology and Michael Vaughan, proprietor of the Vaughan Lodge Hotel in Clare and former President of the Irish Hotels Federation.