Tourism Ireland, together with tourism companies from around the island of Ireland, including Fota House, Arboretum & Gardens, is mounting a major presence at this year’s Philadelphia Flower Show, to target the growing number of Americans interested in visiting our gardens.

The Philadelphia Flower Show is the world’s largest indoor flower and horticultural exhibition, attracting about 265,000 visitors each year – and an ideal platform to showcase Ireland and the wonderful mix of unique gardens to be found here. This year, the centrepiece of the Tourism Ireland stand is a special garden exhibit featuring Newgrange and highlighting Ireland’s Ancient East. 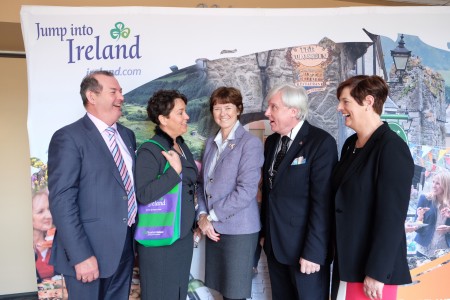 Alison Metcalfe, Tourism Ireland’s Head of North America, said: “Tourism Ireland is delighted to play a major role at the Philadelphia Flower Show once again this year, bringing the unique nature of our gardens, and of a vacation on the island of Ireland, to the attention of thousands of visitors to the show.

“2015 was the third record-breaking year in a row for visitor numbers to Ireland from North America. Tourism Ireland is undertaking an extensive programme of promotional activity again this year – to keep the momentum going and build on that growth. Our ambition for 2016 is to grow visitor numbers from the United States by a further +7% and we look forward to working closely with our valuable industry partners, in both the US and Ireland, to achieve that target.”

Millions of people across the United States are seeing Tourism Ireland’s ads and holiday features this spring. The organisation’s St Patrick’s promotions include sponsorship of the live coverage of the New York St Patrick’s Day parade on the NBC network, which will feature seven short films with footage from around the island of Ireland – and will be seen by an estimated two million viewers. Tourism Ireland is also sponsoring the Music City Irish Festival in Nashville. Golf and business tourism promotions, e-marketing and social media activity, consumer shows like the Philadelphia Flower Show, as well as a series of sales blitzes across the US and Canada, are keeping the island of Ireland front of mind for potential travellers.