Each year the Business Information Systems (BIS) programme in UCC invites students to showcase some of their creative work, and to express those sides of themselves less visible in their academic work, in an annual anthology publication.

This year’s Anthology, the 18th edition, titled ‘Out of Self’, which comprises of 42 submissions, was officially launched on Thursday, March 10th in UCC. BIS believes that part of its remit in a University is to help to prepare its students for life, develop confidence in their abilities and themselves, critically analyse, determine a position and take positive action to make a meaningful and lasting impact for themselves and others. 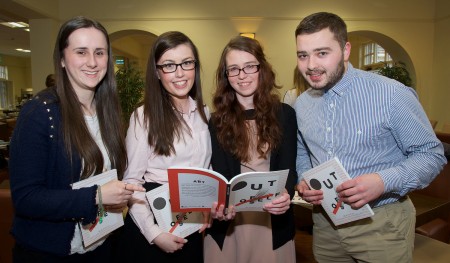 Speaking at the Anthology launch, which was attended by students, their families, and BIS staff, Professor Ciaran Murphy, Head of Business Information Systems at UCC said “Problems are best solved by creative, divergent thinkers in new, unexpected and different ways, by people who have the ability to develop multiple ideas and concepts, to free their imaginations and explore new combinations and possibilities.”

He continued “Creative thinking is not some mysterious talent bestowed at birth – it is a learnable skill and like all skills, some will be better at it than others, and those that are will enjoy competitive advantage. The BIS team wants our students to enjoy that advantage, and we are very proud of the work created here by our students.”

This, and previous editions of the BIS Anthology, have been sponsored by Bank of Ireland; and speaking at the launch, Linda Ryan, Branch Manager at Bank of Ireland’s UCC branch, said “At Bank of Ireland UCC, we support and continue to encourage and engage with the students on their journey through college, career and in life. We are excited to once again sponsor the BIS Anthology, which fosters creativity among Ireland’s students. Building on our long-standing relationship with UCC, we are pleased to partner with BIS and help bring ‘Out of Self’ to fruition. It’s a great honour to be in the presence of so many talented young people today, who shine not only through their academic achievements, but also through a wealth of creative talent.”