With their BEAT Ovarian Cancer Campaign Breakthrough Cancer Research, OvaCare, the Emer Casey Foundation and SOCK are asking women across Ireland not to ignore the warning signs of ovarian cancer, a disease commonly known as a silent killer.

Breakthrough Cancer Research (Breakthrough), in conjunction with OvaCare, Emer Casey Foundation and SOCK, today launched the BEAT Ovarian Cancer Campaign to highlight the key signs of the disease in the run up to World Ovarian Cancer Day on 8th May.

Talk to your GP about your symptoms

The symptoms of ovarian cancer can be confused with other illnesses but the key difference is that these symptoms are persistent and do not come and go. The BEAT campaign is encouraging women to be aware of changes in their stomach, pelvis and abdomen and to speak to a GP where they are concerned. 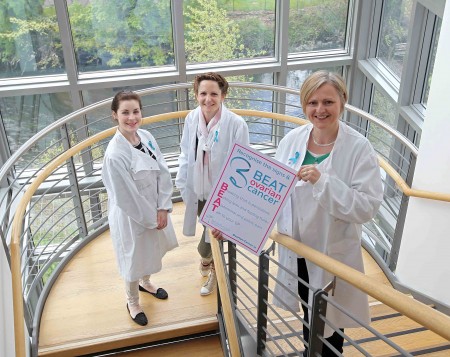 Professor Seamus O’Reilly, consultant medical oncologist at the Cork Mercy, South Infirmary Victoria University and Cork University Hospitals states, “After extensive work by the NCCP OvaCare, Emer Casey Foundation and SOCK, new GP Referral Guidelines for Ovarian Cancer are currently being rolled out across the country. Making GPs better placed to help patients determine if their symptoms are of concern and warrant referral for further investigation. Early diagnosis is the key for successful ovarian cancer treatment”.

Kate McNamara, who was diagnosed with ovarian cancer and is now in remission is encouraging women to pay attention to their bodies, “Tackling ovarian cancer forced me to switch from the role of ringleader to that of spectator. Once I was in treatment there was not much I could control and yet ovarian cancer can be beaten if you spot the signs early enough and listen to your body. Having gone through the devastation of the diagnosis, the importance of time loomed large for me. Do not allow time to slip by, by making excuses. If you are not happy, if there is something niggling you, have it checked without delay”

Ovarian cancer is the 4th most common female cancer in Ireland. Each year in Ireland approximately 360 women are diagnosed with ovarian cancer and each year 276 women die from the disease in the country. Symptoms can be similar to other conditions, which can lead to late stage diagnosis. While there have been many advances in the diagnosis and treatment of many other cancers, ovarian cancer has had little improvement in its prognosis over the last 20 years.

Seamus Carr, whose wife Brid passed away from ovarian cancer, feels research is the future, “Brid wanted every women to be aware of the signs of ovarian cancer and to know what to do if they were concerned. After Brid passed away, our family and friends felt very strongly that research into ovarian cancer was as important as awareness, which is why we wanted to support the new Ovarian Cancer Research Fellowship at Breakthrough’s research centre in Cork. We do not want other families to go through the devastating loss of a loved one because of a disease that can, and should, be beaten.”

Principal Investigator at Cork Cancer Research Centre, Dr Sharon McKenna, states, “It is only through increased awareness for earlier diagnosis and research for new treatment options that changes in the prognosis of ovarian cancer will take place. The Ovarian Cancer Research Fellowship, established with the Carr family, will help accelerate our research into this disease and we hope that through this research we can impact on the lives of women who are diagnosed with this form of cancer.”