Mount Mercy College on the Model Farm Road recently received a Trócaire School Award in recognition of the outstanding support they have provided to the organisation’s work with communities in Africa, Asia, Latin America and the Middle East. Since 1995, the College has raised over 120,000 euro for Trócaire’s work and this money has benefitted the lives of thousands of people across the developing world. 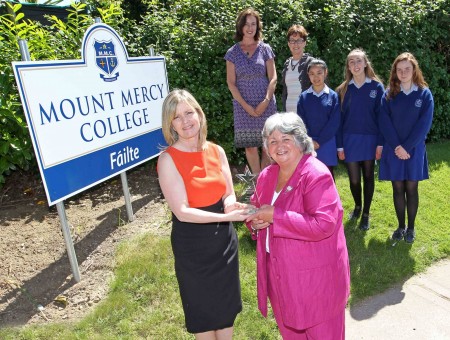 Taking part in the Lenten 24 Hour Fast each year and buying gifts through Trócaire’s Gift Campaign are just two of the ways in which the College has supported the work. Not only have substantial funds been raised for the agency but students have also participated in development education sessions, exploring issues such as child labour, the impacts of climate change in poorer communities, displacement owing to conflict, and why it is important to support the education of girls and women.

Janet Twomey says “I must pay tribute to the teachers I have met in the College, who have deeply instilled in students a sense of social and global justice with those on the margins of our society. They are the ones responsible for helping to increase students’ awareness and understanding of the interdependent and unequal world in which we live and encourage them to act for a most just and fair society”.