The Mayor and his colleagues on the Clonakilty Mayoral Council hosted a “Mayoral Reception” recently at which four locals “who have achieved something special over the last year” were honoured.

The event was held at O’Donovan’s Hotel, and Mayor Cionnaith Ó Súilleabháin in his welcome pointed out that since the abolition of all the town councils two years ago, Clonakilty is now the only town with a Mayor which is representative of the community. (In 2014, a special election was held in the town in which five people were elected by the general population, to hold the title of non-statutory, honourary “Mayor of Clonakilty”.

He outlined that in the past the Town Council would have held Civic Receptions for local achievers and that the Mayoral Reception was the nearest thing possible to it in that it was “local representatives recognising local achievers”.

The Mayor and his colleagues present, each presented one honouree with a personalised scroll, recognisiing her/his achievement and the reason for being honoured. 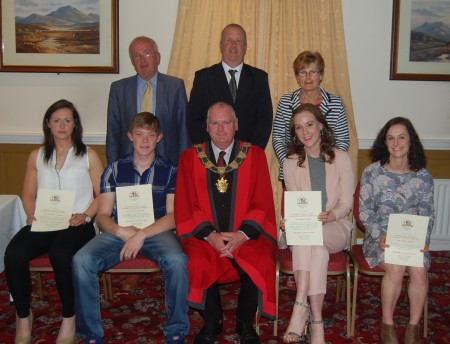