The four-star, Flynn family owned, Imperial Hotel in Cork city celebrated it’s 200 year anniversary in style on last Thursday night (9th of June) with a glamourous gala dinner for over 70 guests from the worlds of business, the media and entertainment. The evening was hosted by John Flynn whose family own the hotel which was recently refurbished. Over €1 million has been spent on upgrading many of the 125 bedrooms while a new bar, ‘Seventy Six on the Mall’ and a new gym, the Escape Gym have also been added.

Guests to the gala celebrations were greeted by actors dressed in the period costume of the merchants of 200 years ago who acted out parts of the history of the hotel which was once the commercial rooms for butter merchants. Meanwhile, two beautiful Irish Wolfhounds stood guard with their handlers who were also dressed in period costume and caused quite a stir on South Mall Street as passers-by stopped to be photographed with them.

Upon arrival guests were treated to sweet treats in Lafayette’s Brasserie before being brought on a guided tour of the property. Later that evening guests enjoyed a drinks reception in the new bar before sitting down to a delectable dinner prepared by the Imperial’s new chef, Nicky Foley. The food was a spectacular affair and featured such dishes as Ballycotton Crab, Wild Turbot, Angus Beef and Butter Merchants Brown Bread Ice Cream. Later guests enjoyed music by Cork based tenor, Ryan Morgan before retiring to the bar for a night cap and more music.

Some of the well-known faces spotted at the celebrations included Myrtle Allen of Ballymaloe who attended with her daughter Fern and son-in-law, Eoin Little. Other guests included Miss Cork 2016, Orla Clancy, The Mayor of Cork, Cllr. Chris O’Leary and the Lady Mayoress Angela O’Leary. President of UCC, Dr. Michael Murphy was also in attendance as was Conor Healy, CEO of Cork Chamber. The following day several of the guests enjoyed a leisurely lunch at the Farmgate Restaurant at the world famous, English Market.

The Imperial Hotel is Cork’s most centrally located hotel and is regarded by many as the ‘Grand Dame’ of the city, and has been part of the very fabric and life of the city for over 200 years. The hotel exudes an old world, glamorous charm, yet is just minutes from the bustling main shopping and commercial areas of Cork.

The hotel has a rich history, having been designed by Thomas Deane in 1813, it was initially used as commercial rooms for city merchants. In 1816 the building was extended to serve as a hotel and coach yard for the visiting business people, traders and merchants. 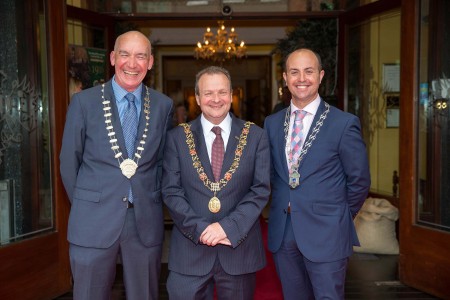 Pat O’Connell, Lord Mayor Chris O’Leary and Paul O’Connell are pictured at the 200 year anniversary celebrations of The Imperial Hotel in Cork city. The gala evening took place in the newly refurbished hotel which is located in the heart of Cork City on South Mall. Photo by Conor Healy Photography,

The Imperial Hotel has 125 bedrooms, a fabulous urban spa, various conference and meeting rooms and a dedicated business centre for up to 250 delegates. In addition, an elegant ballroom is perfect for wedding receptions. When it comes to food the hotel stands out as a hot favourite and most frequented destination in Cork for a bite to eat. Lafayette’s coffee dock is famed for its home baked cakes and pastries and stunning Byzantine inspired, hand painted ceiling and is teeming with people every morning and afternoon. The Pembroke Restaurant is open daily for lunch and each evening for dinner while the Fish Hatch offers people ‘on the go’ the opportunity to grab their own catch of the day on the run. This is ‘posh’ fish and chips at its best!