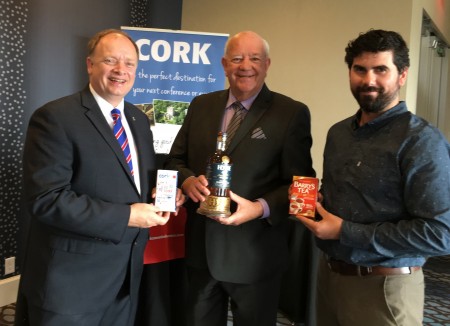 Seven Irish tourism companies, including the Cork Convention Bureau, were in California this week, taking part in a series of B2B ‘Meet in Ireland’ networking events – aimed at growing business tourism from the west coast of the United States to Ireland.

‘Meet in Ireland’ is the official MICE brand for the island of Ireland, which comprises three tourism authorities, Fáilte Ireland, Tourism Ireland and Tourism NI.

The Irish contingent took in San Diego, Santa Monica and San Jose – where they met and did business with top California-based MICE (meetings, incentives, conferences and events) professionals, all on the lookout for world-class and unique business tourism destinations.

Alison Metcalfe, Tourism Ireland’s Head of North America, said: “We were really pleased that so many influential Californian MICE buyers took the time to come and meet with our Irish tourism partners, demonstrating their keen interest in the island of Ireland as a business tourism destination in 2016 and beyond. Business tourism is the most lucrative form of tourism, with visitors travelling to Ireland for business purposes spending about 2.5 times more than the average holidaymaker.”

Alison Metcalfe continued: “2015 was the third record-breaking year in a row for visitor numbers to Ireland from North America, when we welcomed more than 1.5 million visitors. California is now an important source of many of those visitors and this week’s ‘Meet in Ireland’ events were also an ideal opportunity to highlight the ease of access from the west coast of the US – particularly via Aer Lingus flights from Los Angeles and San Francisco to Dublin and the Ethiopian Airlines service from Los Angeles.”

As well as networking ‘Meet in Ireland’ events, Tourism Ireland’s extensive programme of business tourism promotions in the United States includes familiarisation visits to Ireland for decision-makers working in the MICE sector, direct marketing and a presence at IMEX America 2016 (International Meetings and Events Exhibition) in October.