September 30th saw those individuals, teams, and fundraising volunteers who go the extra mile for patients and colleagues at The Mercy University Hospital, officially recognised at The Mercy Stars awards night, which was held in the Radisson Blu Hotel, Cork.

The Mercy Stars, organised by the Mercy Hospital Foundation and The Mercy University Hospital, celebrate those, who through their fundraising efforts make things a little easier for patients, and who help the Foundation invest in new technologies to ensure that The Mercy is at the forefront of the effective diagnosis, treatment and care of Mercy patients. The fundraising awards were presented by Micheál Sheridan, CEO, Mercy Hospital Foundation; while Mr. Jim Corbett, Deputy CEO, Mercy University Hospital, presented awards to the hospital staff who make life better in the Hospital on a day to day basis. Sponsored by Keanes Jewellers, The Mercy Stars is one of the most highly anticipated events on the Mercy’s calendar. 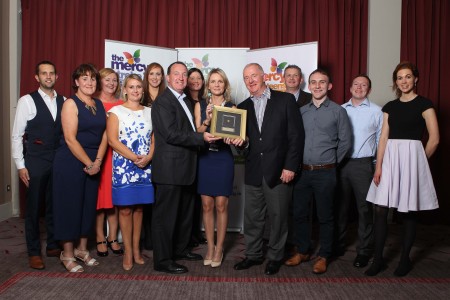 Shannen Bulman and her father Ken from Youghal, were together named The Mercy Stars Hero of the Year. Following the diagnosis in July 2014 that she had Non-Hodgkin’s Lymphoma, Shannen underwent chemotherapy for 18 weeks and thankfully today she is clear from cancer. Shannen’s family and friends, along with Youghal Camogie Club, embarked on a major fundraising drive in aid of St. Therese’s Oncology Ward, raising €23,000. Funds have been used to purchase 10 new recliner chairs for the day ward in St. Therese’s, as well as new seating for the waiting room, while €8,500 went towards repainting the entire ward.

The Special Recognition Award went to The Welcome Inn and was presented to Cal Hayes on their behalf. The Welcome Inn Vintage Club was founded in 2004 by a small group of vintage vehicle enthusiasts and local volunteers who came together to organise a fun day out, whilst raising much needed funds for local causes. The club organises two vintage events annually, a spring vintage run, and the main threshing and vintage rally event every October at The Welcome Inn, outside Bandon. Funds raised to date total over €185,000, with approximately €55,000 being donated to the Mercy over the last 12 years, funding the POONS mobile paediatric oncology nursing service, allowing children who are suffering from Leukaemia to be treated in their own homes.

Organisers of Cobh Darts picked up the Mercy Stars Fundraising Event Organiser of the Year award. Over the last three years Damien Rowe, Richie McGrath, Adie Walsh, Dave Campbell, Chris Keogh and Robert Pender have held an exclusive Darts Night in the Commodore Hotel in Cobh. Their events have featured World Dart Champions such as Phil ‘The Power’ Taylor, Micheal Van Gerwen and Gary Anderson, and have raised €23,792 for The Mercy Foundation Kids + Teens Appeal.

In the fundraising category, Megan McKenzie was named Face to Face Fundraiser of the Year. The Mercy has thousands of people all over Cork donating €15 a month to support the Hospital. This year they will collectively raise over €500,000 for the Hospital. Megan’s sterling work alone will result in donations totalling over €77,000 a year. Unfortunately Megan was unable to attend the awards, but shared a lovely video message.

Pat Carey, from Youghal was named Volunteer Fundraiser of the Year. Pat has been lighting up his house every Christmas since 2013 by putting on a spectacular Christmas Lights Show in aid of The Mercy. Pat was treated successfully at The Mercy and decided this was a way to give something back and thank the staff who provided care that was second to none. Pat has raised nearly €10,000 for cancer services at the Mercy since he began his annual event.

Scoil an Athar Tadhg, Carraig na bhFear was named School Fundraiser of the Year, with pupils and staff having raised €9,453 from the sale of the school’s CD featuring the children’s talents and guest artists. This is the sixth year of the school’s CD project and biggest amount raised to date. The purpose of the project was to raise funds to support Bowel Cancer Research at The Mercy.

Speaking at the awards, Micheál Sheridan, CEO, Mercy Hospital Foundation said “Our mission is to inspire people to support advancements in research, diagnosis, treatments and care of patients at The Mercy University Hospital, the People’s Hospital. So it is only apt that we thank and reward our tremendous fundraisers and our incredible Hospital staff, who help to make The Mercy a world class hospital, right on your doorstep, and The Mercy Stars is a great way of recognising their efforts.”

The Mercy Hospital Foundation would like to extend thanks to Mercy Stars sponsor, Keanes Jewellers for their support. Further information on all the night’s winners is available on www.mercyfundraising.ie