The Cork Foundation has joined forces with Oxfam Ireland to host Make Them Visible, a photo exhibition at Cork’s Triskel Christchurch on Thursday, October 20th highlighting the plight of refugees worldwide.

The Make Them Visible exhibition combines photographs by 10 Oxfam photographers with the written word and is aimed at raising awareness about the situation facing refugees and displaced people from Syria, South Sudan, Central African Republic, the Democratic Republic of Congo and beyond. 23 Irish authors including Colum McCann, Belinda McKeon, Gavin Corbett, Rita Ann Higgins, Glenn Patterson, Michael Harding and Nuala Ní Chonchúir supported the Oxfam project by responding to a single image from one of the countries with a piece of flash fiction, a poem or a personal reaction, imagining life as the person(s) pictured

Taking place from 6.00 – 8.00pm, the Foundation is offering the people of Cork an exclusive, ‘one night only’ opportunity to view the exhibition and contemplate this global crisis in a fresh way. 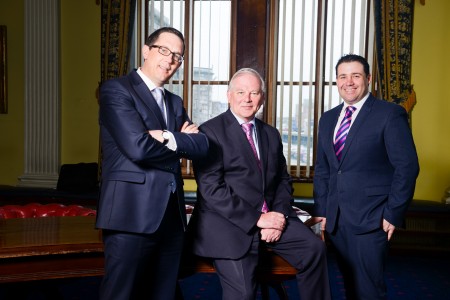 Pádraic Vallely, CEO of the Cork Foundation, said: “The refugee crisis is not just a modern phenomenon or something that happens beyond our shores. Throughout history, thousands of Irish people were forced to leave Ireland, due to famine or economic instability, in search for a better life.

“It is crucial to get Cork people aware and talking about the current refugee crisis. As partner to this event, it is vital to highlight this important issue and also provide a chance for Cork people to get involved and learn more about how Oxfam is helping those forced to flee.”

Jim Clarken, Chief Executive of Oxfam Ireland, said; “The Make Them Visible exhibition reflects just a tiny number of those who are caught up in humanitarian crises around the world. Since it was first launched in September 2015, the reported number of people forced to flee their home has increased from 59.5 million to over 65 million, the largest number since the Second World War.

“Through the power of words, 23 writers from across the island of Ireland helped highlight the life of the people in the exhibition’s photos in a new and poignant way, speaking to our shared humanity while also highlighting the plight of those who have had to flee because of conflict and the daily terror and uncertainty it brings. The photos also offer hope for the future and show how solidarity can be the difference between life and death – these refugees and displaced people are the living proof of how much humanitarian aid can impact their lives.”

The Cork Foundation is dedicated to supporting long-term growth across Cork City & County through sustainable job creation by funding and supporting social enterprises and charitable organisations.

Oxfam is a global movement of people who won’t live with the injustice of poverty. The charity is on the ground in nine out of the 10 main countries of origin for refugees in the world including Syria, Afghanistan, Somalia, South Sudan and Democratic Republic of Congo, as well as in neighbouring host countries like Lebanon, Jordan and Turkey, along with supporting displaced people in countries like the Central African Republic. Its European refugee programmes are in Greece, Italy, Serbia and Macedonia.