A tender competition has been advertised on e-tenders.ie for a major flood relief scheme for the town of Clonakilty in Cork.

The Minister of State for the Office of Public Works and Flood Relief is Seán Canney T.D.

“Clonakilty is one of many towns in Cork that has suffered serious flooding in recent times. I am delighted to announce that, following a Public Exhibition in late 2014 and early 2015, the plans for a major flood relief scheme for the town have progressed to the tender stage and that this critical milestone brings the people of Clonakilty nearer to being protected from the type of devastating flooding that has impacted the town in the past. Alongside the major flood relief works already completed in Mallow and Fermoy, the major works underway in Bandon and Skibbereen, the very significant scheme for Cork City whose Public Exhibition I launched last week and numerous Minor Works projects, these proposed works in Clonakilty will ensure that the people of Cork will see the benefit of an enormous investment by the State in flood protection measures.”

The Minister commented that the Capital Investment Plan 2016 – 2021 includes an allocation of €430 million for flood risk management and this very significant provision is funding the existing flood relief capital works programme which has 12 major flood relief schemes currently under construction, a further 6 major projects, including Clonakilty, planned to commence construction in 2017 and 17 other major projects at design development and planning stages which will move to construction stage over the next few years. The overall flood risk capital envelope is also available to fund additional projects, over and above those in the existing work programme, which will fall to be implemented over the coming years under the Flood Risk Management Plans under the CFRAM* Programme.

The existing and planned expenditure on flood relief measures represents an unprecedented level of investment by the Government to protect individuals, families, communities and businesses throughout the country against the most serious risk and impact of flooding. This year the Office of Public Works will spend its full allocation for flood relief works of just over €52 million and is working towards meeting the target set out in the Capital Investment Plan to increase annual spending on flood risk management to €100 million per annum by 2021.

The River Fealge (Clonakilty) Drainage Scheme works are designed to protect the town of Clonakilty from fluvial (river) flooding and tidal flooding to the 1 in 100 year and 1 in 200 year standard respectively.

Formal Public Exhibition of the Scheme under the Arterial Drainage Acts 1945 and 1995 ran for the period from 15th December, 2014 to 20th January, 2015. Details on the Scheme are available from the following website: http://www.clonakiltyfrs.ie

The procurement process for a civil works contractor is now underway and tenders are to be returned by 12.00 noon on 14th February 2017. The Scheme will be submitted to the Minister for Public Expenditure and Reform for formal Confirmation under the Arterial Drainage Acts in early 2017. Works are anticipated to start on site in summer 2017.

History of floods in Clonakilty

Clonakilty has a long record of flooding from tidal storm surges, heavy rainfall and extreme river flows over the past 60 years. More recently, extreme rainfall and river flows have inundated the centre of Clonakilty causing significant damage to properties and businesses and distress to Clonakilty’s residents. Flooding issues are likely to increase as the town grows and the climate changes into the future. Prioritisation of Clonakilty Following the flood events in the summer of 2012, Clonakilty was given top priority in the South Western CFRAM Study area in order to identify the preferred Flood Risk Management Option for the town as soon as possible. 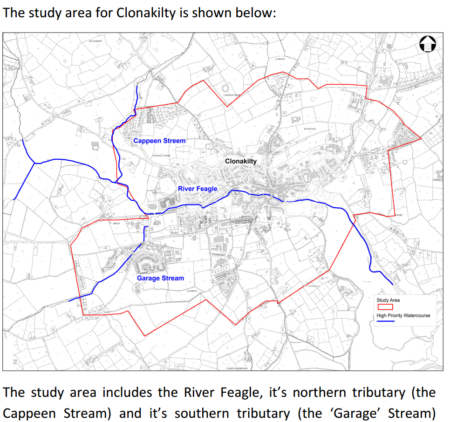