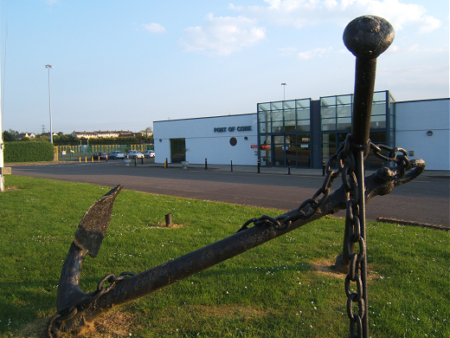 File photo of anchor at Ringaskiddy Car Ferry building. Copyright TheCork.ie 2009.The Green Party in Cork are “deeply concerned” that An Bord Pleanála has once again postponed the decision date for the Indaver Ireland waste incinerator in Ringaskiddy.

The postponement has been reported in the Irish Examiner Newspaper but the Board have not issued another decision date in the future, saying only that it is expected in the spring. The date had been set for 24 January 2017.

“It feels like we’re going around in circles at this point. This is the fourth time we’ve heard the Board have postponed their decision. The community have been waiting for this since last summer.”

“Ultimately this isn’t fair on them and, as CHASE have said many times, it seems that rules only apply to the community and not to the Board and not to Indaver. The planning hearing was nine months ago. The community engaged in that over seventeen days and gave the Board more than enough reason to issue a refusal.”

“There is an issue too with the lack of transparency in the process. We simply don’t know what’s going on and we won’t know until after the decision. We don’t even know if the Inspector’s report has been written. We don’t know anything. This is supposed to be a transparent process and it’s not living up to that name.”

Last month, Catriona was awarded with a Cork Environmental Forum individual award for her work on behalf of the Cork Harbour Community community during the incinerator oral hearing.