Geoff Gould, Artistic Director, said, “The Fit-ups were very popular in the 1940s and 1950s when popular actors such as Harold Pinter and Anew McMaster would regularly visit small villages in Ireland and perform theatre plays in a tent or on the back of a truck. Last year’s the Festival was an unqualified success with local audiences flocking to see The Man in the Woman’s Shoes, Those You Pass On The Street and the classic Under Milk Wood.”

Cork County Council Arts Officer, Ian McDonagh said, “This is a great opportunity for people in North Cork to see some great new Irish plays performed by exceptional actors. We are delighted that we have been able to support this tour to towns and villages in North Cork through the County Council’s new Creative Communities Fund.” “Not to be missed.” 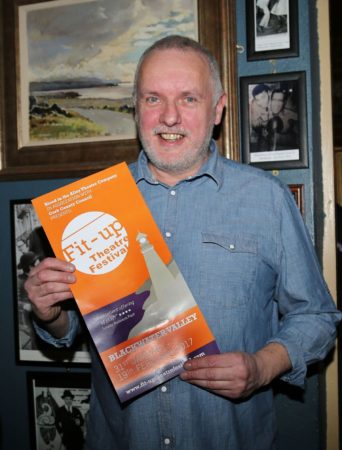 After last year’s success of Those You Pass on the Street, Kabosh theatre company return from 7th – 12th February to present Laurence McKeown’s new play Green and Blue, which explores the painful and humorous realities faced by the individuals who patrolled the border during the height of the conflict.

Finally, Eoin Colfer’s new play, My Real Life, starring Don Wycherley will drop the curtain on the line up of entertainment, running from 14th to 19th February.

Tickets are on sale at the venues €15. Concessions €12. Family tickets €36 (2 adults and 2 teens). Doors open at 7.30pm. The productions are suitable for 14+ Audiences. For more information visit: http://www.fit-uptheatrefestival.com/blackwater2/blackwater-valley-venues-2017/