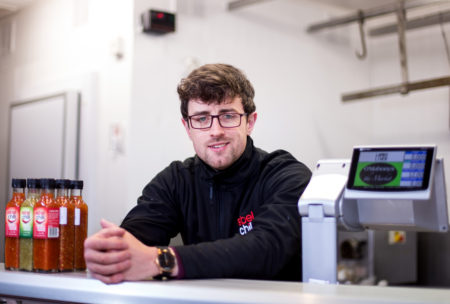 Cork company, Rebel Chilli has been selected by the Local Enterprise Office (LEO) Cork City to represent LEO Cork City at the 2017 National Enterprise Awards on May 25th in the Mansion House, Dublin.

Founder of Rebel Chilli, Paul Moore, will be in with a chance of winning one of 12 Awards on offer and his share of the €40,000 national prize fund for his company that produces fresh chilli sauce in Cork City. Passionate about chilli sauce, Paul now has five sauces and is selling to 300 stores in Ireland, including 50 Dunnes Stores outlets, Supervalu and Fallon & Byrne to name but a few, as well as exporting to the UK and Dubai.

Back in 2010, chilli sauce-making started out as a way for Paul to make pocket money while studying for a Business Information Systems degree in UCC. Paul began selling at farmers markets and the company has been constantly growing since. In 2014 Rebel Chilli was awarded a gold Blas na hÉireann Award for Best Sauce which boosted sales and also brought an investor on board; and in 2015 Paul moved Rebel Chilli to a kitchen unit in Farranferris.

Having also recently won ‘Best Start Up’ in LEO Cork City’s search for Ireland’s Best Young Entrepreneur (IBYE), Paul will be hiring his first employee in the next few months thanks to the support he has received from LEO Cork City. Paul has plans for Rebel Chilli to expand even further into the UK market and has also identified the Irish foodservice sector as one that holds a lot of potential for his brand.

Adrienne Rodgers, Head of Enterprise, Local Enterprise Office, Cork City stated; “We are delighted to have Paul with his company Rebel Chilli representing LEO Cork City at the National Enterprise Awards 2017. The amount of hard work and dedication Paul puts into Rebel Chilli is very obvious, and this is most definitely represented by his successes to date. It’s fantastic to see the company growing and expanding to different countries such as the UK and Dubai, and with our support to see Paul hire his first employee.

Last year’s LEO Cork City representative at the National Enterprise Awards was Darren Hayes, founder of DARE Technology, an innovative Irish engineering company established to develop and commercialise patented renewable energy technology to remove the reliance on fossil fuels in applications that can be replaced by a renewable energy resource.

Updates around the National Enterprise Awards are available by searching #NEAwards17 on social media.

Further details about the supports available to local start ups and small businesses in Cork City are available through www.localenterprise.ie/corkcity.