Anam Cara Cork’s annual ‘Lunch to Remember’ took place in The Clayton Hotel in Cork today to raise vital funds to support bereaved parents in Cork and across Munster.

Amarenco Solar, KPMG, Port of Cork and Deloitte were among the businesses taking tables at the popular annual fundraiser, attended by many other friends of Anam Cara from across Cork. 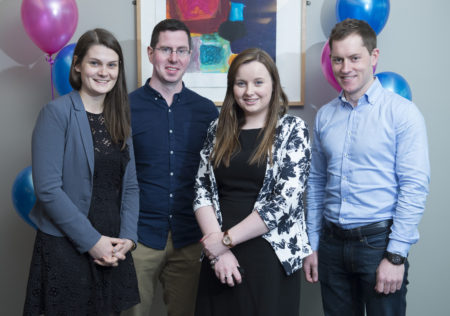 In the past year, Anam Cara has hosted 35 bereavement support events across Munster, with 513 mothers and fathers in attendance. Of these, 99 (almost a fifth) were coming to Anam Cara for the first time. This is a testament to the strong support offered by the Anam Cara groups.

Anam Cara has well-established groups meeting monthly in Cork city, Kerry and Tipperary, as well as a partnership with the Milford Care Centre in Limerick. A big development in the past year is that Anam Cara held three events in Bantry, and a new group is being set up that will offer support to parents living in West Cork. At the end of April, Anam Cara will host an Information Evening for bereaved parents in Waterford.

“The cause of death could be stillbirth, SIDS, an unexpected illness, suicide, SADS, road traffic collisions, drownings, or an accident in the home or farm. The intense grief resulting from such a loss is something that can only be understood by people who have experienced it. Anam Cara provides safe and comfortable settings where bereaved parents can be among others who understand and care because they know what it is like.”