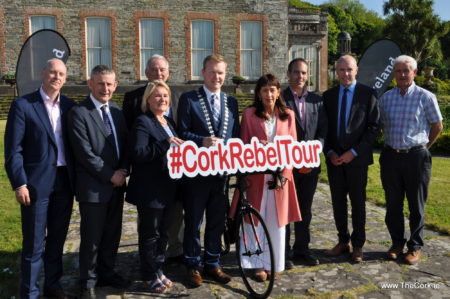 The event, which starts from Glengarriff, encourages people of all fitness levels to get physically active by getting on their bikes and taking in the breath-taking scenery of the Beara Peninsula’s hills, valleys, and picturesque local villages. Speaking at the launch, CEO of Cork County Council, Tim Lucey, said: “Cork County Council is delighted to co-sponsor this year’s event”. He added “It is great to see the Sport Ireland Rebel Tour of Cork returning to the Beara Peninsula for the 5th year. West Cork provides a fantastic backdrop for this event and I am positive participants both new and returning will enjoy the spectacular nature of the routes and scenery on offer”.

Since 2009, Cork Sports Partnership has been supporting recreational cycling in Cork. Last year over 2,500 riders took part in the Rebel Tour and participation is expected to grow even further this year. Brendan Keating, CEO of Port of Cork said of the announcement, “Bantry Bay Port Company is delighted to co-sponsor this year’s Rebel Tour. I would encourage everyone, no matter what your ability of cycling to take part in this year’s event and visit scenic West Cork at the same time. There is a fantastic array of routes to choose from and I have seen what a great day out and weekend in West Cork this event can be for colleagues, friends and family. I look forward to seeing you all in Beara on 9th September.”

In addition to welcoming the new sponsors of the Rebel Tour, Ted also outlined the importance of the support received by Cork Sports Partnership to coordinate an event the size of the Rebel Tour. “Events like the Rebel Tour would not be possible without the support of local communities in West Cork and event sponsors like Sport Ireland, Cork County Council and Bantry Bay Port Company”. Ted concluded “I look forward to welcoming everyone to Glengarriff on September 9th for what promises to be the biggest and best Rebel Tour yet”.

Participants are encouraged to sign up early with family, friends and work colleagues to avoid missing out. Registration for the event is now open at www.corkrebeltour.ie

About the Sport Ireland Rebel Tour of Cork

The Sport Ireland Rebel Tour of Cork is mass participation leisure sportive organised by Cork Sports Partnership. Over 2,500 participants take part in the event annually with 160k, 85k, 55k and 10k family fun routes to choose from. The event is the final leg of the Sport Ireland Cycle Series which had over 15,300 participants in 2016. Other events in the series include:

The “160km Rebel Challenge” is regarded as one of the “Most Challenging Sportives” on the Irish cycling calendar and will challenge the most hardened of Rebel Warriors! The route starts out from Glengarriff with a climb over the Caha Pass, through a series of beautiful hand hewn rock tunnels across the border into the Kingdom of Kerry.

Following an easy descent to Kenmare, riders turn left onto the R571 in the direction of the Beara Peninsula along the shoreline of the Kenmare Bay. Riders continue into Lauragh before climbing the Healy Pass for the first time, crossing back over into the Rebel County of Cork. The descent from the Healy Pass requires care and attention with many sharp and hairpin corners to negotiate. A welcome food/refreshment stop awaits riders at the bottom of the first Healy pass descent.

The route continues on the R572 through the fishing port of Castletownbere and on to the village of Allihies, before climbing the significant rocky mountain pass between Allihies and Urhan known locally as “Reentrisk” or translated meaning “The Cods Head”.

The second foodstop on this challenging route is laid out in Eyeries, where riders prepare for the final leg of their journey back to HQ in Glengarriff. Continuing along the R571 through the village of Ardgroom and rolling into Lauragh, riders are guided to take a right turn onto the R574 to climb the Healy Pass for the second time, armed with the full knowledge of what lays ahead. The Healy Pass descent again needs care and attention before turning left at the bottom and back onto the R572 rolling back into Glengarriff.

The “85km Rebel Rider” provides cyclists with a number of challenging climbs and is best suited to the experienced but lapsed cyclist or the eager to test and challenge themselves cyclist. The route departs Glengarriff along the N71, climbing the Caha Pass through a series of beautiful hand hewn rock tunnels across the border into the Kingdom of Kerry.

Following an easy descent down to Kenmare, riders take a left turn onto the R571 in the direction of the Beara Peninsula along the shoreline of the Kenmare Bay, before turning right at Tousist for a welcome food/refreshments stop.

Enclosed by mountains and sea, Tuosist has some of the most spectacular scenery to be found anywhere in Ireland, with views out to the Atlantic Ocean and across Kenmare Bay to the Ring of Kerry and the majestic range of the Magillicuddy Reeks.

Departing Tousist and following the coast road through Kilmakilloge and onto Lauragh where riders are guided onto the R574 to begin their climb of the famous Healy Pass. Once out of the valley, riders are treated to some of the most spectacular views of the Beara Peninsula, which distracts from ill-feelings towards the previous climb.

On passing back over the border at the summit of the Healy Pass, riders descend back into the Rebel County of Cork and are treated to a 4 km descent of sharp hairpin bends with wonderful little stone walls and bridges hidden beneath. At the base of the Healy Pass, riders turn left onto the R572 back towards Glengarriff to recover and celebrate with your fellow cyclists.

The route departs Glengarriff along the N71, climbing the Caha Pass through a series of beautiful hand hewn rock tunnels across the border into the Kingdom of Kerry. Following an easy descent down to Kenmare, passing Molly Gallivans Cottage, Bonane Heritage Park and Lorge Chocolates, riders will be guided into a welcome food stop to recover and refuel for the return journey.

On your return trip, as you approach Glengarriff from the Kenmare side the main tunnel dramatically frames the entry back into the county of Cork. The scenery that presents before you on the Glengarriff side is stunning with a view of Barley Lake, Glengarriff woods and Bantry Bay, which will quickly remove any aches and pains from the climb as you roll gently back down into the picturesque village of Glengarriff.

INSURANCE DENIED: If you can’t get a car insurance quote, then you are not alone
Previous Post
BALLINCOLLIG: Gardai seek witnesses to Ballincollig bypass tragic cyclist death