NAVAL SERVICE: L.É. Eithne departs Cork Habour to assist in the Humanitarian Crisis in the Mediterranean

Minister with Responsibility for Defence, Mr. Paul Kehoe T.D., was in the Naval Base, Haulbowline, Co Cork this morning to meet the Captain and crew of L.É. Eithne before their departure for the Mediterranean to assist the Italian authorities in search and rescue activities in the Mediterranean.

During his meeting with the crew, the Minister said “I want to wish Commander Brian Fitzgerald and each and every member of the crew of L.É. Eithne a safe and successful mission. You are travelling to the Mediterranean with the best wishes of the nation.”

The Minister further commented “The humanitarian crisis arising as a result of the loss of lives in the Mediterranean continues to be of great concern to Ireland and to our EU partners. I believe that we should continue to support Italy in a practical manner as far as possible and the Italian authorities have welcomed this support”. 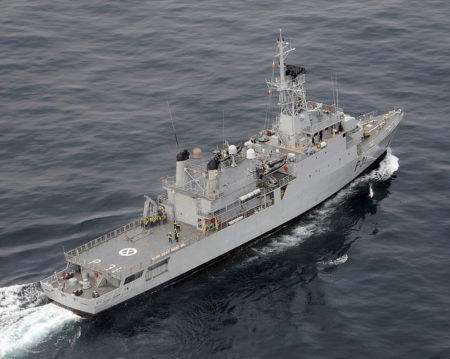 The Minister added, “The success of the operations carried out in 2015 and 2016 demonstrates the value of Ireland’s participation in this important humanitarian mission. I am pleased that we are in a position to continue to provide search and rescue activity for a further year. Ireland’s provision of naval assets and crew to the Mediterranean over a three year period is significant in the context of the number of ships we have available.”

L.É. Eithne under the command of her Captain, Lieutenant Commander Brian Fitzgerald, and a crew of seventy two (72) is expected to be deployed in the Mediterranean until mid-July, dependent on the operational demands and requirements arising.