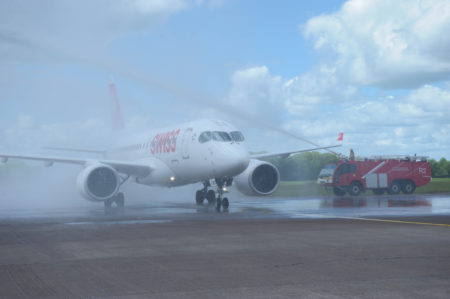 The Swiss Ambassador to Ireland, H.E. Mrs. Marie-Claude Meylan was at Cork Airport today to mark the inaugural Swiss International Air Lines route to Zürich together with the newly appointed Honorary Consul of Switzerland in Cork, Mrs. Anne-Kristine Kjelsen. Swiss, Cork Airport’s newest airline partner, launched the new twice weekly service that will operate Fridays and Mondays throughout the summer through to 2nd October next. The new route will see an additional 9,000 seats from Cork Airport this year

Zürich, the largest city in Switzerland, is known as the alpine centre for Swiss business and tourism. Famous for some of the world’s best chocolate and timepieces, it is also a city that will delight taste buds as it is also renowned for its culinary excellence. There are also strong business links. Switzerland is Ireland’s 5th largest export market.

Speaking at today’s launch, Niall MacCarthy, Managing Director at Cork Airport said: “We are delighted to welcome another new airline and particularly one as prestigious as Swiss to Cork and the South of Ireland. We also welcome Swiss Ambassador Marie-Claude Meylan to Cork to mark the occasion. Swiss is a member of the Star Alliance and a subsidiary of the Lufthansa Group. We are very pleased today that the distinctive Swiss national flag which is also seen on the tail fin of the aircraft is flying proudly over Cork Airport. We look forward to welcoming thousands of Swiss visitors to Cork and providing further connectivity to businesses both here and in Switzerland.

“Zürich is a modern, cosmopolitan destination and is a very accessible city with an abundance of culture, cuisine and arts. The old town (Alstadt) is particularly beautiful and worth visiting. Likewise, our new inbound Swiss visitors will have the Wild Atlantic Way and Ireland’s Ancient East to savour and enjoy the food and golf particularly on the doorstep of Cork Airport. We look forward to a long and dynamic relationship with Swiss”, he added. 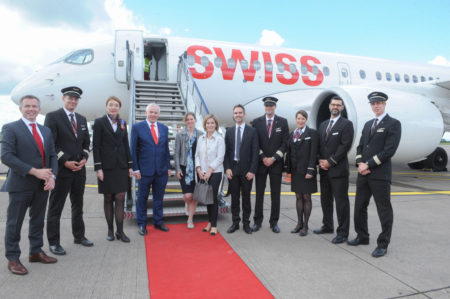 H.E. Mrs. Meylan said: “This new connection with Swiss International Air Lines is a fantastic addition for Cork, Zürich and the surrounding regions. There are a number of ties between the two cities and Cork’s reputation as the epicentre of Ireland’s tech and pharma sectors is very alluring for Swiss business visitors. But there are also plenty to attract the leisure traveller from both countries and I would encourage anyone from Munster to take the time to explore Switzerland and all it has to offer. Last year saw close to 100,000 visitors from Switzerland to Ireland”.

“The new SWISS bi-weekly service connecting Zurich and Cork is a great addition to Lufthansa Group’s portfolio in Ireland and offers connections not only to Switzerland but to a variety of SWISS destinations around the world” says Andreas Koester, Lufthansa Group’s Senior Director Sales UK, Ireland & Iceland.

Swiss International Air Lines, Switzerland’s national carrier, is part of the Lufthansa Group and is also a member of Star Alliance, the world’s biggest airline grouping. The partnership is a further boost to the steady increase in capacity and routes that Cork Airport, the gateway to the South of Ireland is providing to passengers.