This month marks the 60th year since the formation of the Seandun Macra na Feirme Region.

To mark the occassion, former Seandun Chairperson and historian Jim Fitzgerald, Knockraha, gives a recount of the formation of the Seandun Macra region.

In 1944, Steven Cullinane and a group of other vocation teachers set up a Young Farmers organisation in Ireland which they called ‘Macra na Feirme’. At this time the second World War was drawing to a close and Irish agriculture was very underdeveloped. With the country having a big land area relative to its population we were barely able to feed ourselves. The majority of young farmers at the time had only primary level education and Macra was formed in the hope that it would be a springboard to revolutionalise Irish agriculture, which it did.

Following the formation of Macra na Feirme at a National level in 1944, under the guidance of agricultural instructers and vocational teachers clubs started to spring up all over the country. A Cork County Executive was established in 1948 to co-ordinate the work of all the clubs in Cork. However, by the early 1950s there were over 60 clubs in the county and with 120 miles separating Castletownbere and Mitchelstown it was recognised that one executive could not serve the whole county. And so the county executive decided to reorganise the county structure and a committee was established to examine the issue. They recommended to disband the old Cork County regional executive and to replace it with regions based on the ancient baronys of the county which pre-dated the county system. These ancient baronys were previously ruled by a baron. There were 6 baronies in County Cork; Avondhu, Duhallow, Carbery, Imokilly, Muskerry and Seandun. So meetings were called in the respective areas to form the new executives.

Seandun was the barony surrounding Cork City with Shandon Steeple its centrepiece. A meeting of the clubs in the barony was held in the Old Moore’s Hotel on Morrison’s Island (which is now closed) to form the executive. All the clubs in the region were present. They were Watergrasshill, Glanmire, Knockraha, Grenagh, Ballincollig, Ballinhassig, Ballymartle and Kinsale. The first Seandun officers elected were chairman Con O’ Leary (Ballincollig), vice-chairman Jimmy Hegarty (Glanmire), secretary Margaret O’ Brien, (Knockraha) and treasurer Donal Casman (Glanmire). Within 2 years of forming the Seandun region new clubs had been established in Carrigaline, Whitechurch, Carrignabhfear, Glenville and Killeady.

By the mid-1960s Macra had strengthened further and there were 85 active clubs in Cork. At this point Macra had a huge profile. It was one of the most active organisations in the county drawing great support from all sides of agriculture. Seandun has provided three National Macra Presidents; Declan Martin (Ballincollig), Flor Riordan and Alan Jagoe (Carrigaline) and has occupied many positions on the national committee. It has provided numerous officers to the County executive and regional teams have won many national titles. Seandun has held many important events over the 60 years of its existence, the most important of which was in 1963 when Ireland made the first application to join the European Ecconomic Community (EEC, later to become the EU). At this time Seandun organised a major conference in the auditorium of the old CBC in McCurtin Street.. The principle speaker was Jack Lynch, then Minister for Industry and later Taoiseach, and who was chief negotiator on behalf of Ireland in their application to join the EEC at the time. This event received massive publicity.

One of the most apt summaries of the success of Macra na Feirme was from a statement given in 1957 by Sean T O’ Kelly, former President of Ireland, when opening the new Macra office in Athy, Co. Kildare. At this time he said that Macra had brought laugher and life to the Irish countryside… long may it continue.’

The Seandun region will celebrate its 60th anniversary with a dinner dance which will take place in Rochestown Park Hotel on April 14th 2018. Preparations are currently in their infancy but further information will be provided in the coming months. 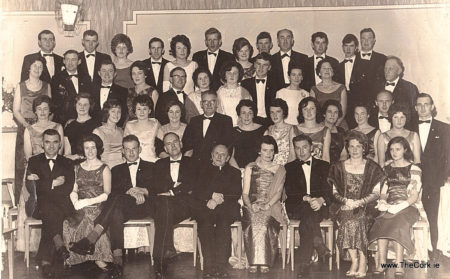