Cork City Council is pleased to announce the official opening of the €2 million Blackrock Harbour & Village Project by the Lord Mayor of Cork Cllr Des Cahill at 3.30pm, Friday June 9.

The completed work will enhance Blackrock’s unique character as an urban village within the city. This investment in public realm hascreated a safe, open and attractive space which will greatly enhance the village and the broader city from a social, recreational and commercial perspective.

Some of the key features of the work include: –

–          The new enhancements within and around the harbour consisting of a boardwalk, a circular seating area, facing into and away from the harbour, and access steps which will facilitate greater recreational uses.

–          The exposed historic tram lines and associated cobbles which lay buried under layers of tar macadam now form part of the village streetscape yet again.

–          The new open vista between the village and the renovated Ursuline convent and its re-graded grounds.

–          The large pedestrian plaza which is designed to accommodate events, markets etc

–          The widened, enhanced and realigned Convent and Blackrock Roads which will facilitate efficient public transportation movement through the area. 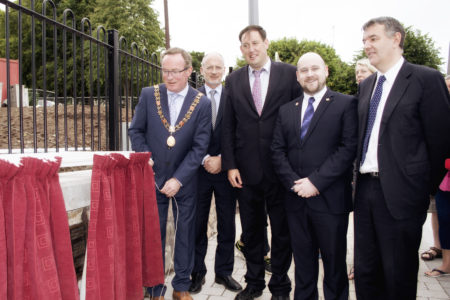 The work was undertaken in two phases as funding became available. Phase 1 was concluded in 2016 and phase 2 has now reached substantial completion.

Lord Mayor, Cllr Des Cahill said: “We are very proud of what we have achieved here but much of the success is down to the Blackrock market traders, local businesses and the public who made it clear that Blackrock village had potential to be further developed. I’d also like to thank the residents for their patience during the works over the past year. They were always very supportive of the project as they believed in it from the outset. It was their project”.

“A series of public meetings were held in the village community centre about the future of Blackrock, with the last held eight years ago. The project, as it appears now, is pretty much the outcome of that public consultation where we sat down and asked the people of Blackrock what they wanted in their community”.

“We also the support  senior management at Cork City Hall and the full support of city councillors. If there’s another person that has to be singled out, it’s Cork City Council Senior Executive  Engineer, John Stapleton who drove this project from the outset”.

The harbour project was financed by the National Transport Authority and Cork City Council at an overall cost of approximately €2 million. It was designed by Cork City Council’s Road Design Section.

Cork City Council would like to thank Ward and Burke Construction for their commitment to the project and all affected residents and business owners in the area for their patience and cooperation during the construction process.