New funding has been announced for female entrepreneurs living in Cork and Limerick. The Women’s Rural Entrepreneurial Network (WREN) project will see more than €330,000 in funding, provided by the Department of Justice and Equality and the European Social Fund, allocated to promote entrepreneurial skills amongst women in these regions, through a tailored and focused approach.

This funding​, administered by SECAD and Ballyhoura Development,​ will support women across Cork and Limerick who have a concrete business idea and wish to become self-employed or who are already in the early stages of business development

Speaking at the launch of WREN, Minister of State for Justice and Equality David Stanton, T.D. said, “I am delighted to announce this important funding for Cork and Limerick and know it will provide valuable support to women considering self-employment or those with a good business idea that want to create a business. SECAD and Ballyhoura Development, in partnership with CIT, will deliver a targeted, focused programme of training, mentoring and support infrastruture for women in the Region.” 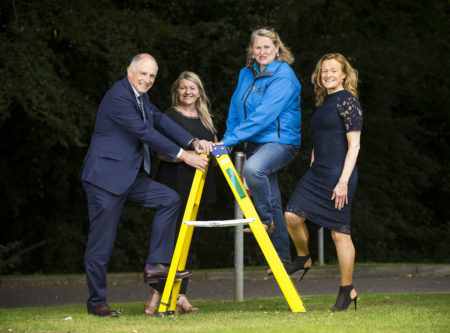 Minister of State for Justice & Equality David Stanton TD with Suzanne Kearney, SECAD, Dorothy O’Tuama, Entrepreneur (Lee Valley Food Trails) and Toni McCaul, SECAD at the announcement of €330,000 in funding for a new initiative called Women’s Rural Entrepreneurial Network (WREN) which aims to promote and support entrepreneurial skills amongst women in Cork and Limerick. The funding is provided by the Department of Justice and Equality and the European Social Fund.
Photo: Cathal Noonan

Under the WREN project, training programmes will include personal development and business skills training, one to one and group mentoring, female ‘role model’ sharing of experience and support, themed networking and experiential learning events, formation and facilitation of the facilitated networking sessions and a networking / business pitching event.

“This funding will support women across Cork and Limerick who have a concrete business idea and wish to become self-employed or who are already in the early stages of business development,” said Suzanne Kearney, Assistant CEO of SECAD. “The programme will provide the option of accredited training as well as business and employment supports. We believe this will be a hugely valuable project for both economic development in these regions, as well as for equality of opportunity.”

The WREN Project is co-funded by the Irish Government and the European Social Fund as part of the ESF Programme for Employability, Inclusion and Learning (PEIL) 2014-2020.