CIVIC HONOURS: Cork Person of the MONTH is North Cork nun – in recognition of mission nursing in Korea

Sr. Philomena O’Sullivan, a Columban sister originally from North Cork, has been named June Cork Person of the Month in recognition of her life’s work as a nursing missionary in Korea.

Following Sr. Philomena’s profession in 1949, she trained as a nurse at Mercy University Hospital, Cork. She left Ireland for Korea in June 1955 with Sister Mary David Mannion and they were only the second group of sisters to arrive in Korea. Sr. Philomena spent six months in Mokpo before moving to the northern part of the country where she and her colleagues established a Clinic Foundation. 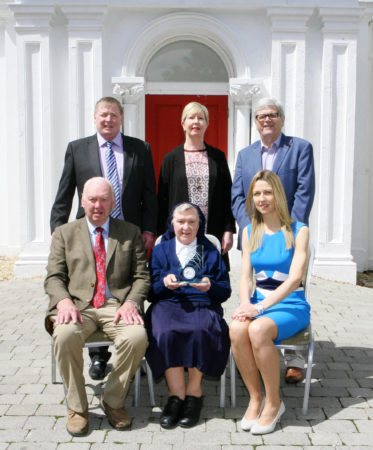 “Fifty-five years ago this month, I arrived in Seoul, Korea with my companion, Sr. David Mannion. We travelled by boat from Cobh, Co. Cork to New York and were met on arrival by sisters from our Boston house. From there, we travelled on a Swedish freighter from Los Angeles to Tokyo, via Manila. From Tokyo, we boarded a US army plane to Seoul in Korea,” said Sr. Philomena.

“Following our arrival in Korea, we set out by train for Mokpo, a southerly seaside town. Back then, it was a 12-hour journey; these days it’s merely a short two hour trip! The Columban sisters had recently opened a clinic in Mokpo and people flocked there, often queuing up from late at night to receive medical treatment. We were able to source medicines from the U.S., samples from doctors’ offices and some of the pharmaceutical companies. We also received help from the U.S. army which enabled us to treat the local people at our clinic,” continued Sr. Philomena.

“The incredible work of Irish missionary sisters like Sr. Philomena is not well known in Ireland, but they are recognised as heroines in the countries they work in. To this day, Sr. Philomena O’Sullivan is considered an iconic figure in South Korea and I’m delighted that we have this opportunity to acknowledge her lifelong dedication to missionary work,” said awards organiser, Manus O’Callaghan.

On arrival in Korea in 1955, Sr. Philomena and her colleagues faced an extremely turbulent environment. It was the end of the Korean War and there were significant challenges in treating the many thousands of people who attended their Clinic. A large number of their patients had been forced to flee North Korea and were suffering from tuberculosis and malnutrition, in addition to many people who required treatment for land-mine injuries inflicted during the war.

After 17 years working in post-war conditions, Sr. Philomena was transferred to Mokpo in the south of the country, to continue her work with the poor and the sick at a local hospital. At that stage, she was elevated to the position of Regional Superior of all the Sister Communities in Korea.

Sr. Philomena travelled home to Ireland in 1971 to study midwifery at St. Finbarr’s Hospital. In 1974, she returned to Korea, establishing a base in Cheju, an island off the coast of Korea, where she set up a clinic together with developing a weaving industry providing local employment.

Following a stroke in 1977, Sr. Philomena returned home to Ireland to recuperate. In 1979, she returned to Mokpo where, along with two doctors and four sisters, she opened a hospital where she worked in paediatrics and out-patient clinics. During this time, Sr. Philomena also cared for patients in a leper colony on Sorokdo Island, off the coast of South Korea.

Sr. Philomena continued her work in Mokpo until 2009, following which she returned to Ireland. Having spent more than 50 years working in Korea, she celebrated her Diamond Jubilee with her fellow Columban Sisters in Maghermore, Co. Wicklow on August 24th, 2009. Now retired, she continues to reside in Co. Wicklow.

Sr. Philomena O’Sullivan received two honorary awards for her work during her time in Korea.
In June 1971, Sr. Philomena was presented with an award from the Office of the Governor, Kangwon Province, Republic of Korea. This award was in recognition and appreciation of her outstanding service to Kangwon Province, for demonstrating humanitarianism and providing medical treatment to the needy between March 2nd, 1956 and June 30th, 1971.

Certificate of Appreciation, June 30th 1971: for her outstanding service and great contribution to the improvement of the health and welfare of the citizens of Chunchon, through the establishment of the St. Columban’s Clinic on March 2nd, 1956. This certificate of appreciation was presented to Sr. Philomena O’Sullivan, St. Columban’s Clinic, Chunchon city. The award was presented on behalf of Bark Jong Seong, Mayor of Chunchon city, Republic of Korea.

Sr. Philomena O’Sullivan will now go forward, with the other Persons of the Month chosen so far this year, for possible selection as Cork Person of the Year, at a Gala Awards Lunch at the Rochestown Park Hotel on January 19th, 2018.