Linking both the start and finish points of the Wild Atlantic Way, the Local Link service will provide a connecting bus service between the two locations for the first time.

Speaking at the launch, David O’Brien, CEO of Local Link Cork outlined how the service was initially proposed by local tourism interests in the area, and following a series of meetings the proposal was put to the National Transport Authority (NTA) who in turn agreed to support the service.

Mr. O’Brien also outlined some added value elements to the new route including:
• A daily morning and evening service from Clonakility to the West Cork Technology Park
• A morning and afternoon service from Clonakility to Inchydoney Beach.
• A service from Kinsale to Charles Fort will also operate daily, while a Kinsale Town Shuttle will operate three times daily. This service is primarily aimed at older people – and supports Kinsale as an Age Friendly Town.

All services are open to the public – locals and tourists alike – and the vision for the service is that will support community initiatives; education & employment along the route.

The service will also allow tourism interests along the route to partner with one another and thus provide a more cohesive and attractive offering to tourists visiting the area.

In this way it is hoped the service will prove very popular and we look forward, with the support of all interested groups as outlined above, to creating a new dynamic that can help grow the route and continue to support the respective communities.

Local Link Cork is one of seventeen offices nationally who operate the Rural Transport Programme under the auspices of the National Transport Authority (NTA). 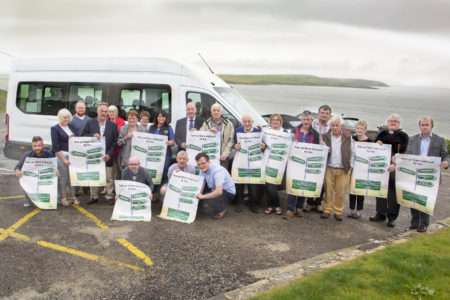 Pictured At the Launch of the new Kinsale to Clonakilty return bus services (route 253) are Members of the Local Courtmacsherry Bay Area Action Group who’s representatives are drawn from the Business, Tourist,& Community Organisations in the Four parishes that span the New Bus Service The Ballinspittle Kilbrittain Timoleague and Barryroe wide Committee have spent the last 2 years lobbying and Preparing for this Bus service whose inauguration it is hoped will facilitate a great improvement in the commercial life of the Bay Area included in photo at left is Cllr Christy O’Sullivan representing Clonakilty Chamber of Commerce & on the right is Ciaran Fitzgerald representing the Kinsale Chamber of Commerce
Pic: Donie Hurley 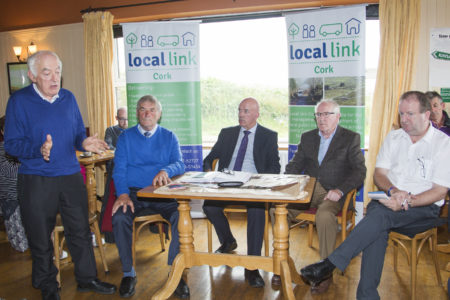