Mallow College of Further Education has been announced as an Approved Educator for the Institute of Certified Public Accountants in Ireland (CPA Ireland). The College joins a panel of four face to face learning educators and 2 online line learning educators throughout Ireland, who have been selected to educate CPA students because of the strength of their tuition credentials and their demonstrated commitment to providing student support. 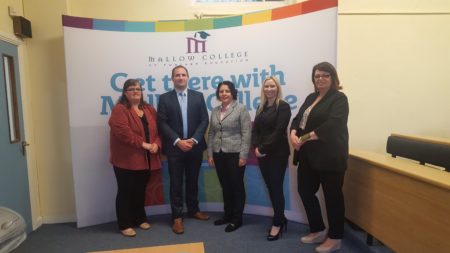 CPA Ireland is one of the main Irish accountancy bodies with 5,000 members and students. Earlier this year Mallow native Deirdre Kiely was elected its President. Speaking about this announcement Ms Kiely said:
“We are delighted to partner with Mallow College of Further Education to reinforce CPA links in the region. The Institute has a community of CPA members, students and approved employers in Cork and neighbouring counties, who will be well served by the centre’s long standing reputation for education excellence. The CPA designation is the most commonly used designation worldwide for professional accountants. This new accreditation will allow students the opportunity to work towards a CPA qualification that will provide excellent opportunities both in Ireland and internationally.

John Healy, Director of Adult Education at Mallow of Mallow College of Further Education said “We are delighted to have been granted CPA Approved Educator status. This recognises the high standards of tuition delivered by our team of experienced lecturers. For our students, the versatility of the CPA qualification will allow them the opportunity to broaden their career prospects in many sectors. The demand for professional accountancy services is still very strong and future graduates can look forward to a rewarding and lucrative career.”